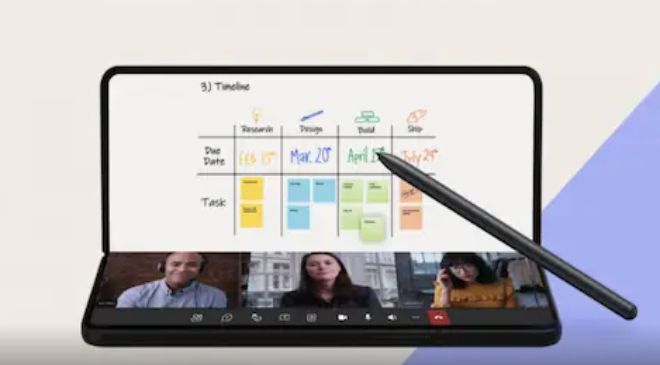 Samsung has such a big first mover advantage that the company is able to command the attention of tech giants for exclusive features for their line-up of foldable phones. It is something we had noted in our review of the Samsung Galaxy Z Fold3 5G foldable phone a few weeks ago. Samsung confirms that the two latest foldable Android phones, the Galaxy Z Fold3 5G and Galaxy Z Flip3 5G officially get access to exclusive functionality and usability options with popular apps including WhatsApp, Spotify, Microsoft Teams, Gmail and Google Chrome, to name a few. This is in line with Samsung’s promise prior to the launch of this year’s foldable phone line-up and that popular apps from Google and Microsoft will be able to take advantage of the larger foldable screen as well as functionality including flex mode and S Pen.

This year’s Samsung Galaxy Z Fold3 5G is the first foldable in the world to get the stylus functionality, with the S Pen. Part two of that is the fact that popular Microsoft apps including Teams, Outlook and Office come bundled with the Samsung Galaxy Z foldable phones. That has allowed Microsoft to integrate that into the Microsoft Teams Whiteboard on the phone, for better classroom and meeting collaboration. This follows the promise of making Outlook behave more like the desktop version on the large foldable screen complete with the dual pane layout, as well as new functionality for Microsoft Office and updates to the presentation mode in Microsoft Teams.

Popular instant messaging app WhatsApp has given the Samsung Galaxy Z Fold3 5G and the Samsung Galaxy Z Flip3 5G the first access to the feature that finally unlocks the ability to switch WhatsApp chats between an Android phone and an Apple iPhone. This means any iPhone user who wants to switch to Samsung’s latest foldable phones can now move their chats across platforms. Other Samsung Galaxy phones will soon get this functionality. The Facebook-owned WhatsApp says other Android phones and indeed the Apple iPhone will get access to the chat transfer feature in the coming weeks.

Music streaming app Spotify has a goodie in store too. If you are a Spotify subscriber—and this is a good enough reason if you already aren’t—using the app on the Samsung Galaxy Z Fold3 5G and the Samsung Galaxy Z Flip3 5G enables a new wider layout and improved look as well as accessibility. This interface is designed specifically for the two different foldable phone form factors, and isn’t the standard interface stretched to fit these screen sizes better.

Google has also given multiple apps enhanced feature set for the Samsung Galaxy Z Fold3 5G and the Samsung Galaxy Z Flip3 5G. The Gmail and Google Duo apps are getting the flex mode for group calls and you can also send emails from the main screen. With Google Chrome, Google Maps and YouTube, the updates now offer quick switching between the cover display and the main foldable display, including multi-windows for web browsing on the larger foldable screen.

During our reviews of the Samsung Galaxy Z Fold3 5G and the Samsung Galaxy Z Flip3 5G, we had noted in elaborate detail the changes that Microsoft and Google in particular were implementing exclusively for these foldable phones. “Compared with the first-generation Samsung Galaxy Fold, we are already significantly better off with apps now more receptive to this screen size, aspect ratio and that you can have sharing the 7.6-inch display real estate too. Yet, what immediately stands out for this generation is the promise that Microsoft and Samsung are indeed working to add even more. Microsoft Teams, Microsoft Outlook and Microsoft Office will get to use this screen size and functionality better. For instance, Outlook will behave more like it does on your desktop, using the dual-pane mode to give you half of the screen space for reading an email and the other half for previewing other mails. Similarly, dragging and dropping stuff between Office apps will become easier, and you’ll also be able to run two instances of Word or Excel or PowerPoint, for instance. At the same time, Google has optimized Duo and added Flex mode for YouTube too. If you aren’t getting these changes now, you’d get these in the coming weeks,” we had observed at the time.