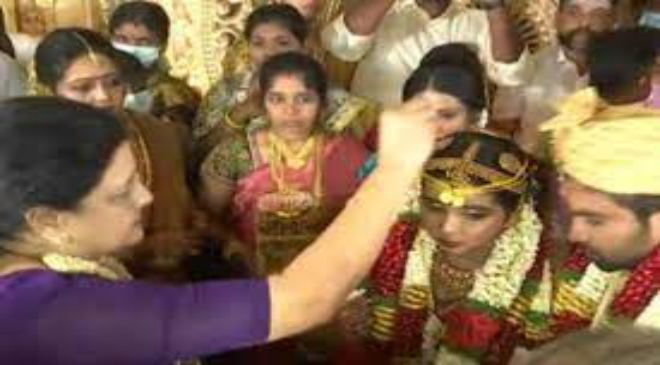 Thousands of AMMK executives and volunteers from all over Tamil Nadu have been camping in Thiruvannamalai for the last two days as Jayaharini, daughter of AMMK General Secretary TTV Dhinakaran and Ramnatha Thulasiah Vandayar, grandson of former Congress MP from Thanjavur, Thulasiah Vandayar and son of Krishnasamy Vandayar, got married on September 16 at a private wedding hall in Vengikkal of Thiruvannamalai district. The wedding was attended by VK Sasikala where Ilavarasi was seen present as well.

The wedding reception took place on September 15 at a private hotel near Anna Arch. The wedding procession was held in a horse-locked chariot with the sound of the accordion. The roads from the Anna Arch to the Vengikkal Private Wedding Hall were adorned with colourful lights on both sides.

Thousands of volunteers gave an enthusiastic welcome to VK Sasikala, where she was seen using the AIADMK party flag on her car while arriving at the venue on September 15.

Traffic has been diverted on the Thiruvannamalai-Vellore road to avoid congestion due to the wedding ceremony. Covid-19 regulations have been followed during the wedding with thousands of volunteers and elites giving their presence.

Subsequently, the wedding took place with the Vellore Narayani Peedam Sri Shakti Amma’s blessing on the mangalsutra. The wedding was attended by Ilavarasi, DMK MLAs Anbalagan and Durai Chandrasekhar, also actor Prabu along with his family and DMDK senior leader LK Sutheesh and Vijayakanth’s son Vijayaprabakaran.