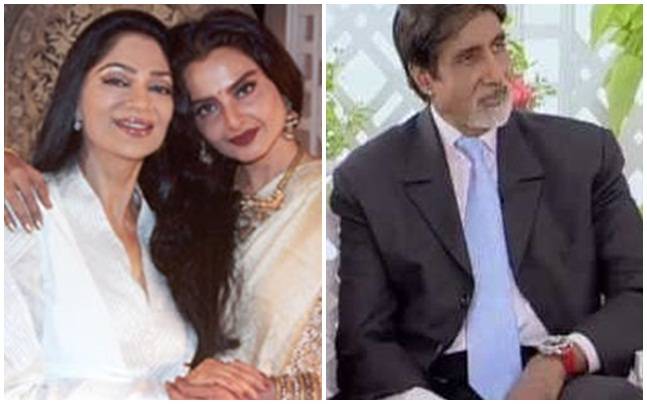 In a 2015 interview with The Indian Express, Simi Garewal shared how she got Rekha to open up about Amitabh Bachchan. Rekha accepted that she was in love with Big B like the rest of the world but they never had a personal connection.

Simi Garewal’s talk show host Rendezvous with Simi Garewal is often termed as one of the best celebrity chat shows to have ever appeared on Indian television. Though it has been a while since Simi wore white on television and asked candid questions to otherwise guarded celebrities, the older episodes of the show are always worth revisiting. One of the most popular episodes featuring Rekha, which was actually televised in 3-parts in 2004, had Rekha talking about her relationship with her father Gemini Ganesan, her relationship with megastar Amitabh Bachchan and the tragedy of her marriage with Mukesh Aggarwal.

As Simi asked Rekha if she was ever in love with Amitabh Bachchan, Rekha said, “Absolutely. Duh, that’s a dumb question. I have yet to come across a single man, woman, child who can help but fall completely, passionately, insanely, desperately, hopelessly in love with him. So why should I be singled out? What do I deny? I’m not in love with him? Of course I am. Duniya bhar ka love aap le lijiyega and add some more – I feel that for that person. Bottomline.”

This was most candid that anyone had ever seen Rekha as she talked about her Silsila co-star. In a 2015 interview to The Indian Express, Simi was asked how she got Rekha to open up about the Sholay actor and Simi shared, “It was easy asking her the question about Amitabh. If I can ask Jayalalithaa if she ever loved MGR, asking Rekha about Amitabh was much easier. A lot of people ask me how I got her to open up. I didn’t know if I did anything special. I don’t want to analyse it. I just chatted as good friends. Rekha and I go back a long way.”

On the show, Rekha had said that she never shared any personal relationship with Bachchan. “There was never a personal connection with him, that’s the truth. Never ever. There was no truth to the controversies and speculation,” she had said.

Rekha also shared that there was never any rift with Jaya Bachchan because of all the speculation as she felt that the Guddi actor was far too sensible to be bothered by gossip. “Didibhai is much more mature, much more together. I’ve yet to come across a woman who is so together. She’s got so much dignity, so much class. She’s got a lot of strength. I admire that woman. We had an association before the so-called rumours and the media messed up the whole image. We were living in the same building and we had a relationship. She was my Didibhai, she still is – no matter what happens nobody can take that away. Thank God she realises that too. Whenever we meet she’s very sweet – she’s not just civil, she’s just herself,” she had shared.

Amitabh Bachchan and Rekha were never seen together on screen after Yash Chopra’s 1981 film Silsila and as per Rekha’s admission in the Simi Garewal interview, they only met at public functions and award shows. Simi told The Indian Express in the same 2015 interview that they probably never worked together because of all the “hungama” that had happened earlier.

“After all that controversy, I don’t think it was an easy thing to happen. He is a married man with children and grandchildren. So much hungama happened that we couldn’t expect that to happen again but I do agree they make a lovely pair onscreen,” she said.