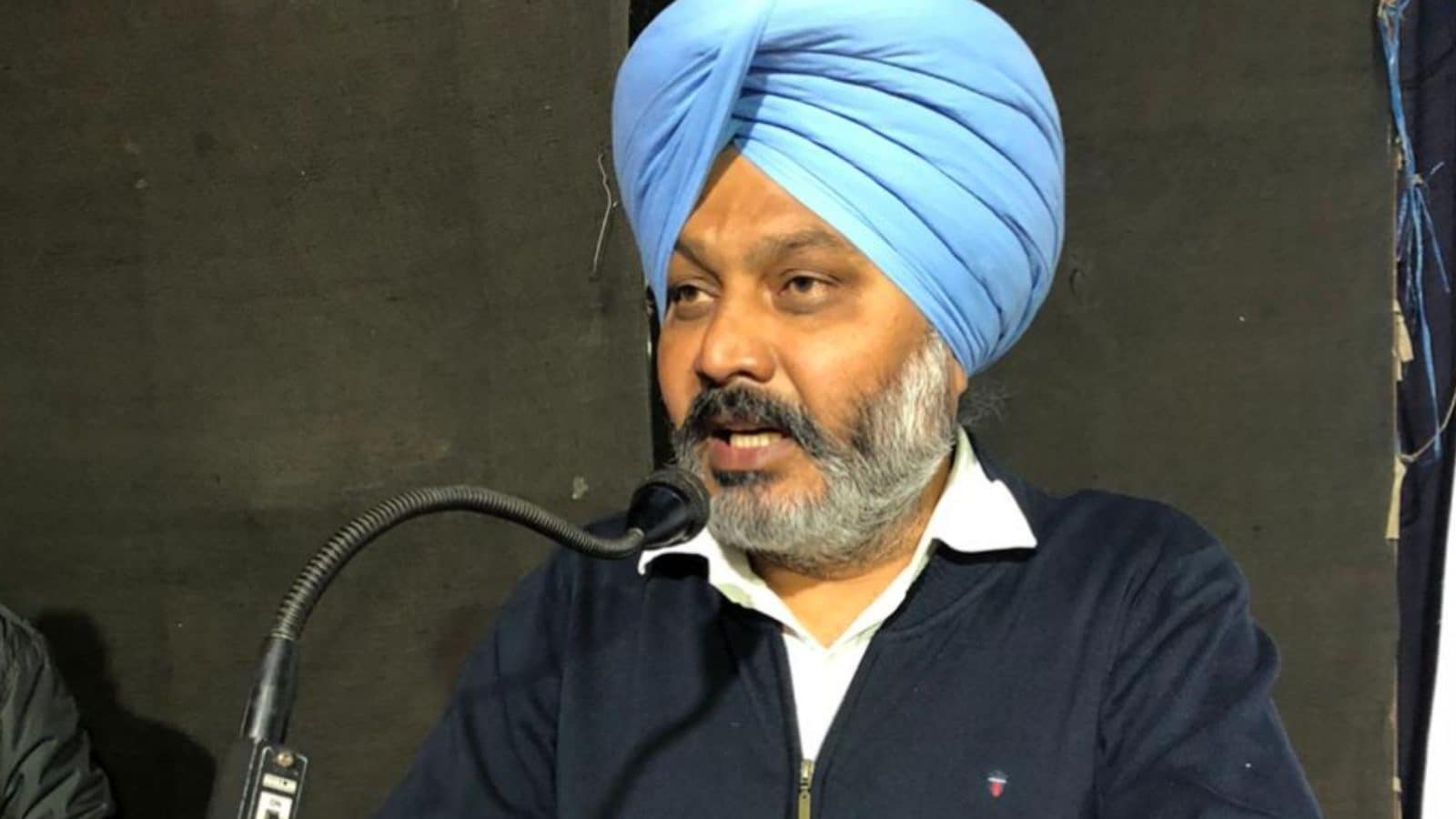 While there has been much chatter on the Aam Aadmi Party (AAP) not having a chief ministerial face yet in Punjab, Leader of Opposition in the state Harpal Singh Cheema said that an announcement will be made before the upcoming Punjab Assembly Elections in 2022.

Cheema, who the AAP MLA from Dirba, appeared confident of a win. In an interview with CNN-News18 he questioned work done by the Congress during its current tenure and said changing a chief minister at the last hour will not help them win. “The point I am making is they have made him (Charanjeet Cheema) chief minister only for three months. They had made many tall promises during the run up in 2017 assembly elections. Which one of those have they implemented?” Cheema said during the interview.

He said that people of Punjab had demanded justice on various issues including the desecration of the Guru Granth Sahib in 2015 and the farm laws, but the Congress did not deliver. “Captain saab (Amarinder Singh) had promised that every household will be given a job. This was a big flop. The land, sand and liquor mafia are having an unbridled run. There was no change on the ground, not even in small changes,” he said.

Cheema also said that people voted for AAP in 2017 because of Arvind Kejriwal’s policies and the party will get votes this time too.

Edited excerpts of the interview:

What do you think are repercussions on the AAP following the Congress party’s surprise move of choosing a Dalit as the CM?

But it is a very significant and bold move — even in terms of symbolism even if it is (as you say) for three months.

The point I am making is they have made him (Charanjeet Cheema) chief minister only for three months. They had made many tall promises during the run up in 2017 assembly elections. Which one of those have they implemented? Punjab has seen maximum corruption during the days of the Akali and Congress governments. People will not forgive them so easily.

Wouldn’t you agree that this move of the Congress puts pressure on the AAP to declare its CM face — at least declare who will lead the party in Punjab?

The party will announce its chief ministerial candidate at the right time before the elections.

Does the move of the Congress (of having a Dalit CM) not put pressure on AAP at least to clarify the position it would offer to Dalits?

No, no, there is no pressure at all.

What is the reason for your confidence?

We are confident. Congress has delivered nothing for Punjab in the four and half years. People of Punjab have been demanding justice in the Guru Granth Sahib beadbi issue in 2015, two people were killed in the firing. Till date those people responsible for it have not been jailed. This is something that even a child in Punjab is aware of, every citizen is aware of this. Captain saab (Amarinder Singh) had promised that every household will be given a job. This was a big flop. The land, sand and liquor mafia are having an unbridled run. There was no change on the ground, not even in small changes. They (Congress) must have done its surveys and must have known that the ground has slipped under their feet in Punjab. This is the reason they must have thought of changing the CM with the hope of making some gains. However, as I understand, Congress will not gain anything out of this one move.

The question everyone is asking is who is AAP’s CM face? When one looks at Akalis or the Congress, one has some idea. But when you look at AAP, one draws a blank.

See, I have said this before and am saying this again. Before elections, AAP will declare its CM face.

But don’t you feel that it might be too late?

No. Last time, Congress had declared its CM face just 10 days before the elections. We have enough time.

Is it a possibility that the AAP may contest elections in Punjab without announcing a CM candidate?

No. No, that is not a possibility. AAP will contest elections with the announcement of a CM candidate.

In 2017, Majha and Doaba proved to be the AAP’s weakest areas. What is the party doing to change that?

We are working on our organistion. Our organisation is so strong in Majha and Doaba that our volunteers are approaching each and every household in Punjab. Also, people are responding overwhelmingly to the model of Arvind Kejriwalji of education, health, corruption free governance, transport, free electricity.

What about the two deputy chief ministers of the Congress who have roots in Majha (Sukhjinder Singh Randhava and OP Soni)? Is that a cause of a bit of nervousness for AAP?

No, no, no. Please don’t forget that they have been ministers in Captain’s cabinet for four and half years. In these four and half years, what have they done for Majha or Doaba? Now, what are they going to achieve in just three months that they were not able to achieve in four and half years? Both were senior ministers, one was a minister of medical institutions and the second was a minister of cooperatives. What great job have they accomplished that suddenly they will become so popular that they can change the fate of the government? This will not happen. People of Punjab know that these people have done nothing.

So you are confident that people will not give the Congress another chance?

I am 100 per cent confident. AAP will form the next government. No other party will get that chance .

Is it accurate that Bhagwant Mann has been offered the post of deputy chief minister?

Dekhiye, abhi tak kisi ka, abhi tak koi bhi cheez ki kuch bhi nahi hua (until now nothing of the sort has happened. No such thing has happened). I am repeating that we will make announcements regarding such things before elections. This speculation is premature. There is no such thing. Bhagwant Mann ji is our respected member of Parliament and the president of the party in Punjab.

So, Bhagwant Mann has not been offered the post of deputy CM?

You want me to say it. I do not know and neither has any such move been made.

But what about stories that keep appearing that Bhagwant Mann is upset?

There is nothing like that. Wonder from where you are getting these stories. You come to Punjab. He is with the party and will remain with the party, a 100 per cent.

What are you doing now to improve your performance in 2017?

We contested (assembly elections) for the first time in Punjab in 2017. You go into the history of Punjab. Till then, Punjab had not given any space to the third force but it did give that space to Arvind Kejriwal and AAP. People voted for AAP due to the policies of Arvind Kejriwal and chose AAP to be the principal opposition party. Now, we will contest elections in 2022. We have plugged whatever loopholes existed in our organisation. In 2017, the Akali Dal and the BJP transferred their vote base to the Congress to ensure that AAP does not form the government. Many of their leaders spoke on public platforms saying that they voted against the AAP and in favor of the Congress. This is amply evident in Punjab. But, this time, the people are aware of the role Congress or the Akalis or the BJP in bringing the three black laws — the biggest betrayal was by the Akali/BJP followed by the Congress’s actions. When the high power committee was formed regarding these farm laws, Captain saab himself had written a letter to the prime minister saying that this will bring about a big change and he would like to be a member of the committee. He was made a.member but unfortunately did not attend a single meeting. He knew of every development in the committee but did not inform farmers. This is something that is well.known in Punjab. Congress will be wiped out in the forthcoming elections.

What about the possibility of polarisation among the Jatt Sikhs and the Hindus as a result of Congress having a Dalit CM?

In Punjab there is mutual respect of different religions. Such a thing has never happened in the history of Punjab. The intent of the BJP and Congress is bound to fail.