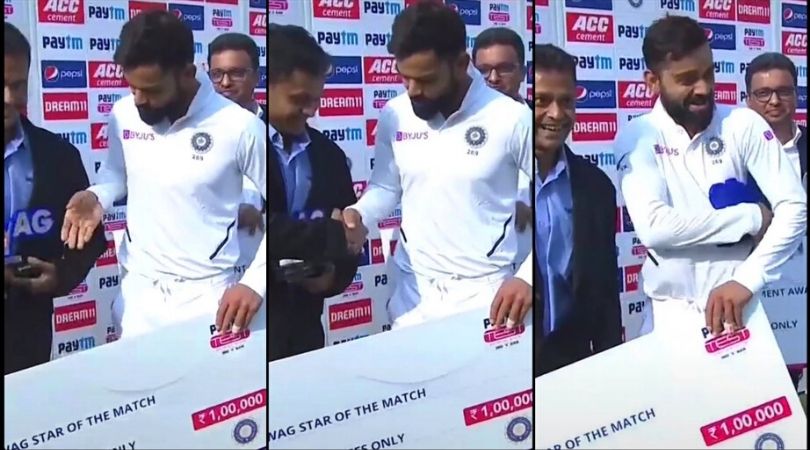 A hilarious video of Virat Kohli winning ‘Pepsi Swag Player of the match’ in India’s first Pink ball Test against Bangladesh in 2019 has gone viral on Twitter.

Despite the IPL 2021 being in full flow, an old video of Virat Kohli receiving an award for his performance with the bat in a Test match has left the Internet in hysterics. The video that has gone viral on microblogging site Twitter first appeared on the web in 2019. The short clip shows skipper Kohli being handed an award for his 136, a knock that helped India register an innings defeat over visiting Bangladesh in India’s first and historic Pink ball Test at Eden Gardens.

Awarded Pepsi Swag Player of the match, Kohli shakes hands with the guest at the presentation ceremony before reminding him to hand him his award. Finding the incident hilarious, Kohli looks back at the cameras and chuckles while striking a pose.

Twitterati, while facing second-hand embarrassment, had plenty to say.

Coming back to 2021’s IPL in UAE, Royal Challengers Bangalore led by Kohli humbled Mumbai Indians on Sunday night where the former won the contestant by 54 runs.

As RCB eventually won the contest comfortably and Harshal Patel’s hat-trick was a sight to behold, it was perhaps Aussie Glenn Maxwell’s all round show (quite literally) that captured the attention of those who tuned in to the previous night’s encounter. The dangerous right-handed batter’s fiery half-century was a dominant one, one that almost made him look like he was a southpaw. Yes, there were switch hits, plenty of them, in case you missed his innings. His fluid batting style also inspired a bunch of memes.

The win also took RCB in the top 4 spot on the IPL points table as Kohli eyes his maiden title before hanging up his boots.