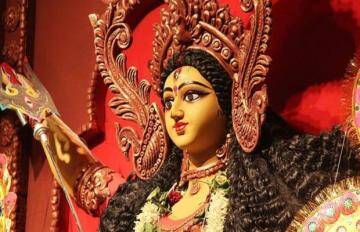 On the third day of Navratri, Maa Chandraghanta is prayed to. As the name signifies, Chandraghanta means a half-moon shaped like a bell.

New Delhi: The auspicious occasion of Navratri began this year from October 7 and will last till Vijayadashami or Dussehra on October 15 respectively. Devotees pray to goddess Durga during this 9-day long festival where different forms of Maa Shakti are worshipped.

On the third day of Navratri, Maa Chandraghanta is prayed to. As the name signifies, Chandraghanta means a half-moon shaped like a bell.

The goddess blesses her bhakts with valour and removes all the obstacles from their lives. She eradicates their worries, sins, physical and mental pain. Seated on a tiger/lion, goddess Chandraghanta is Dashabhuja or the one with ten hands—each holding a significant item. One of her hands remains in Abhayamudra or the blessings posture.

She has a third eye on her forehead and stands for bravery. Trishul, Lotus, Gada, Kamandal, Sword, Bow, Arrow, Japa Mala, Abhayamudra, Gyan mudra are her weapons and she mounts on a tiger.

The goddess can take a ferocious form if the need arises for the betterment of society. She is well equipped for a war-like situation and has destroyed several demons on the battlefield. Her devotees pray to her for courage and strength.

Here’s a Stuti of Maa Chandraghanta as well: