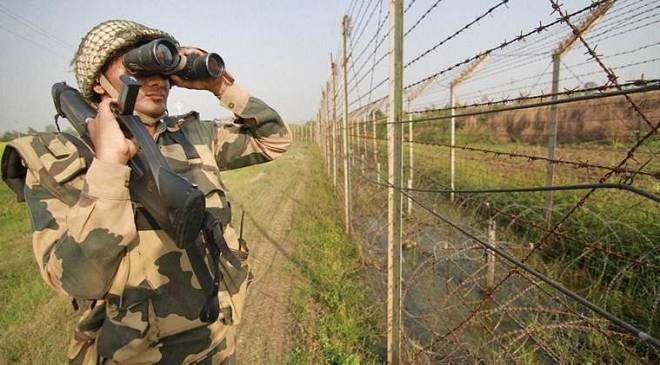 The Union government has amended the BSF Act to authorise the force to undertake search, seizure and arrest within a larger 50 kms stretch, instead of the existing 15 kms, from the international border in Punjab, West Bengal and Assam. In Gujarat, that shares border with Pakistan, the same limit has been reduced from 80 kms to 50 kms while in Rajasthan the limit has been kept unchanged at 50 kms.

Rajasthan and Punjab also share fronts with Pakistan while Assam has an international border with Bangladesh. The Union home ministry issued a notification in this context on October 11 amending a July, 2014 enabling provision for the BSF personnel and officers while they operate in the border areas.

The about 2.65-lakh personnel paramilitary force guards over 6,300 of Indian fronts with Pakistan and Bangladesh. BSF officials said the amendment will help them in effectively curbing trans-border crimes and the new amendment brings in “uniformity” for its operations in the borders states of Punjab, West Bengal, Gujarat, Rajasthan and Assam where it can now operate within 50 kms area from the border.

“The amendment effected on October 11 establishes uniformity in defining the area within which Border Security Force can operate as per its charter of duties and execution of its role and task of border guarding in its areas of deployment. “This will also enable improved operational effectiveness in curbing trans-border crime and to an extent of 50 kms from the international boundary within the states of states of Gujarat, Rajasthan, Punjab, West Bengal and Assam, running along the borders of India,” the BSF said in a statement.

Earlier, the statement said, these limits were fixed to 80 kms in case of Gujarat and 50 kms in the case of Rajasthan and 15 kms in Punjab, West Bengal and Assam. The notification will allow the border guarding force to execute the powers of search, seizure and arrest for the purpose of prevention of any offence punishable under the Passport Act, the Registration of Foreigners Act, the Central Excises and Salt Act, the Foreigners Act, the Foreign Exchange Management Act, the Customs Act or of any cognisable offence punishable under any other Central Act, a senior officer said.

The new amendment in the BSF Act will also allow the force to apprehend any person who has committed offences under these laws. The BSF personnel will continue to invoke these powers in the “whole of the area” comprised in the states of Manipur, Mizoram, Tripura, Nagaland and Meghalaya and Union Territories of Jammu and Kashmir and Ladakh.