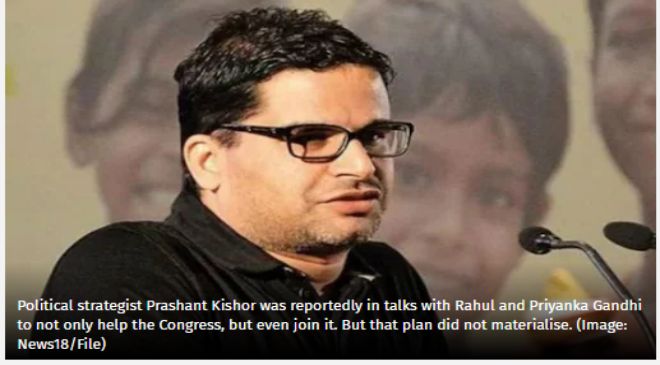 Political strategist Prashant Kishor also said the idea and space that Congress represented was vital for opposition, but party had lost over 90% elections in 10 years.

Political strategist Prashant Kishor has fired the latest shot in the fight for the opposition space at the central level, taking a dig at Congress leader Rahul Gandhi. This comes on top of West Bengal chief minister Mamata Banerjee’s swipe at the Congress leader during her meeting with NCP supremo Sharad Pawar in Mumbai on Wednesday. Kishor said the Congress leadership was not the “divine right” of an individual, despite the idea and space that the the party represented for a “vital opposition”.

On Thursday, he tweeted, “The IDEA and SPACE that #Congress represents is vital for a strong opposition. But Congress’ leadership is not the DIVINE RIGHT of an individual especially, when the party has lost more than 90% elections in last 10 years. Let opposition leadership be decided Democratically.

The tweet could be seen in perspective of two facts from earlier this year — one, that he was and remains an adviser to Trinamool Congress chief Mamata Banerjee, who has been seeking to emerge as the principal opposition leader to the Narendra Modi-led regime at the central level. During her meeting with Pawar, she reportedly said “there is no UPA anymore”. Her meeting with Pawar lasted for about an hour and 10 minutes, during which she also remarked on Rahul’s leadership style saying, “If one does nothing and is abroad half the time, then how will one do politics? For politics there should be continuous endeavour.”

The other fact to note is that Kishor was reportedly in talks with Rahul and Priyanka Gandhi to not only help the Congress, but even join it. But that plan did not materialise and there continues to be speculation over the reasons.

In that light, Kishor’s not-so-veiled dig at the Gandhi family is being seen as personal too. After Mamata’s victory in the Bengal assembly elections earlier this year, Kishor had announced that he would “no longer work in this (political strategy) space”, thereby meaning that he would not be working as a campaign strategist.

He had said he remained open to becoming an active politician again. He had taken the post of vice-president in Nitish Kumar’s Janata Dal (United) after working with him in fighting off the BJP challenge in Bihar in 2015. Though Nitish was in alliance with the RJD and Congress originally, he has since aligned with the BJP and remained CM. Kishor left the JD(U) around that time and went back to being just a backroom force for Mamata and even the DMK in Tamil Nadu.

He was also engaged as a strategist by the Congress in Punjab in 2017, and was to reprise the role until things changed on two fronts there: Kishor announced to quit the strategy space and the Congress replaced its Punjab CM Captain Amarinder Singh with whom Kishor had worked.