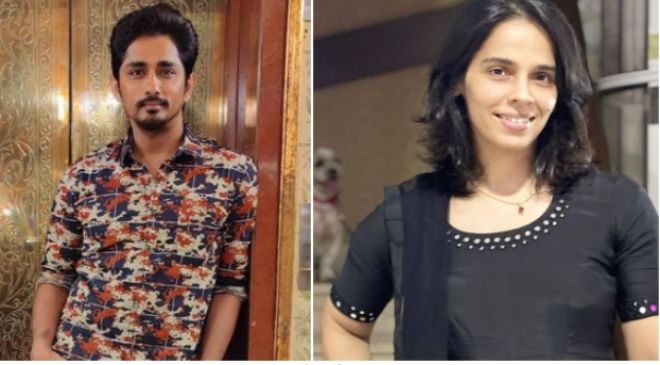 Actor Siddharth has now issued a clarification regarding the controversy, stating that ‘nothing disrespectful was insinuated’ in his tweet mentioning Saina Nehwal.

National Commission for Women chairperson Rekha Sharma has demanded action against Tamil actor Siddharth for his controversial tweet mentioning badminton champion Saina Nehwal. Siddharth was responding to Saina’s tweet about PM Narendra Modi’s security breach in Punjab. Sharma took to Twitter to draw attention on the subject as she wrote about Siddharth, “This man needs a lesson or two. @TwitterIndia, why this person’s account still exists?..taking it up with Concerned police (sic).”

Recently, Saina had written about the Prime Minister’s security issue in a post which read, “No nation can claim itself to be safe if the security of its own PM gets compromised. I condemn, in the strongest words possible, the cowardly attack on PM Modi by anarchists. #BharatStandsWithModi #PMModi.” Reacting to her tweet, Siddharth, who is known for his bold, unabashed opinions on topical subjects, wrote, “Subtle cock champion of the world… Thank God we have protectors of India. Shame on you #Rihanna.”

His first tweet was called out by some of his colleagues as well. Singer Chinmayi Sripaada had called the aforementioned tweet as ‘crass.’ “This is really crass, Siddharth. You just contributed to what a lot of us women are fighting against,” read the tweet.

Later, when his tweet caught heat online, Siddharth even issued a clarification, stating that his tweet doesn’t imply anything outrageous or hurtful. The actor mentioned via a tweet, “COCK & BULL.” That’s the reference. Reading otherwise is unfair and leading! Nothing disrespectful was intended, said or insinuated. Period.”

Later, while speaking to PTI, Saina herself opened up about the controversy and said, “Yeah, I’m not sure what he meant. I used to like him as an actor but this was not nice. He can express himself with better words but I guess it’s Twitter and you remain noticed with such words and comments.” “If the security of the PM of India is an issue then I’m not sure what is secure in the country,” she added.