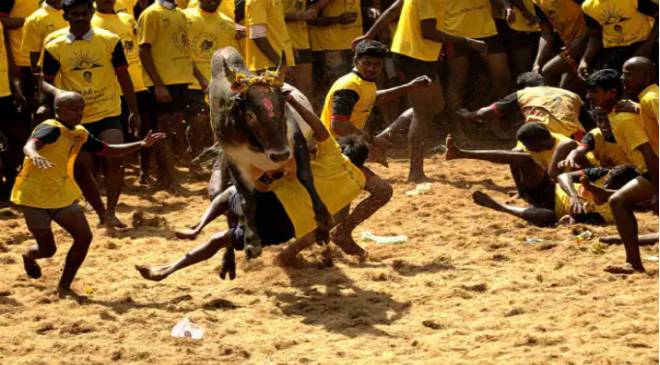 The government also has made it mandatory for both the bull owners and their assistants who register their animals for the sport and the tamers, as well, to produce a fully vaccinated certificate besides RT-PCR test negative report

Chennai: Amid a sharp rise in its Covid-19 cases over the past few days, the Tamil Nadu government on Monday issued SOPs for Jallikattu, allowing only 150 spectators or 50% of the total seating capacity. The government also has made it mandatory for both the bull owners and their assistants who register their animals for the sport and the tamers, as well, to produce a fully vaccinated certificate besides RT-PCR test negative report at least 48 hours before the event. On Tuesday, the government informed that the Alanganallur Jallikattu events will be held on January 17, Monday instead of 16th January as full lockdown will be in effect in the State on Sunday.

“Only the bull owner and its trainer would be allowed during the registration. Those with valid identity cards provided by the district administration, alone, will be allowed inside the arena,” the order read issued by the government on Monday reads. Like last year, for the Jallikattu 2022, too, the government restricted the number of spectators to 150 in open spaces or 50% of the seating capacity (whichever is less).

“Spectators should also produce fully vaccinated against Covid-19 certificate and RT-PCR negative report, two days before the event,” the government order said and added that strict social distancing norms will be enforced.

Here are guidelines issued by the state government:

The district administration in Vellore, Tiruvannamalai, Ranipet and Tirupattur, had banned the conduct of Jallikattu events, ahead of Pongal festival. According to a report published in The Hindu, a large group of Jallikattu enthusiasts gheraoed the Vellore Collectorate, seeking permission from Collector P. Kumaravel Pandian, to organise the event during the festival.

“During the pandemic, such large public events are automatically banned to prevent the spread of the infection. Special health and police teams were formed to check any violations on COVID-19 norms,” Ranipet Collector D. Bhaskara Pandian told The Hindu.

The Jallikattu event is conducted as part of Mattu Pongal, the third day of the four-day-long harvest festival Pongal.