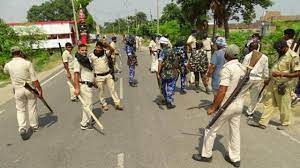 This is the second such recovery today after another IED was found at the Ghazipur flower market in East Delhi.

Amritsar: Days ahead of the Republic Day celebration on January 26, Punjab police on Friday recovered an improvised explosive device (IED) weighing 5 kg, along with currency worth Rs 1 lakh, near the Attari-Wagah border. According to a Punjab Police, the device found near the Attari-Wagah border came from Pakistan. This is the second such recovery today after another IED was found at the Ghazipur flower market in East Delhi.

The seizure was made after the team of Amritsar Special Task Force (STF) received a tip-off about the smuggling of arms, ammunition, and drugs from Pakistan across the border.

According to Rashpal Singh, Assistant Inspector-General of Police (AIG), ST), Amritsar, more contests seized from the recoverey site will be revealed after further investihation. “We got information about drugs but when we reached there, found it to be an IED weighing around 5 kgs. The contents of the bag will be revealed after further investigation. Currency of Rs 1 lakh has also been recovered from the place that is very near the Wagah-Attari border. It has come from Pakistan,” the AIG told news agency ANI.

Asked about the threat posed due to the recovery of the IED in the upcoming Assembly election which is scheduled to take place in a single phase on February 14, Singh said that the matter is under investigation. “Nothing can be said at this moment as it is the initial stage,” he said.

Earlier today, the fire officials received the information about the suspicious unattended bag in the flower market at 10.19 AM in Ghazipur, Delhi. Soon after receiving information, the officials from Special Cell of Delhi Police, NSG’s bomb detection and disposal team and fire tenders reached the spot and cordoned off the area.