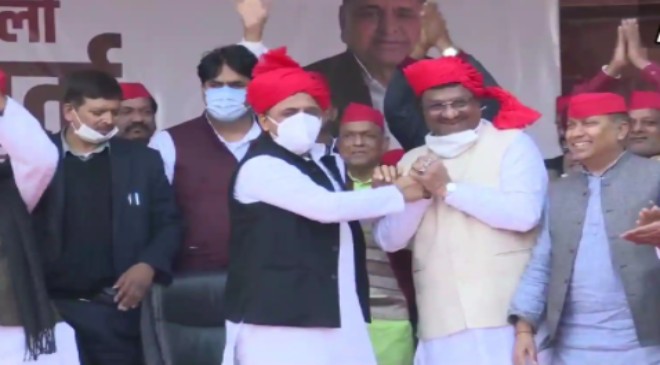 UP Election 2022: The BJP’s Uttar Pradesh unit has witnessed a string of defections over the last few days, starting with cabinet minister Swami Prasad Maurya, followed by three MLAs close to him on the same day – Bhagwati Sagar, Raushan Lal Verma, and Brijesh Prajapati.

Lucknow: Former minister Swami Prasad Maurya, who resigned from his post and the Bharatiya Janata Party on January 11, has joined Samajwadi Party today. Along with him, Dharam Singh Saini, Bhagwati Sagar and Vinay Shakya, who defected from the BJP over the past few days have also been inducted into the Akhilesh Yadav-led party. Maurya vowed to defeat the BJP and exuded confidence in the SP-led alliance to make the saffron unit shrink to 45 seats like it was before the 2017 UP Assembly elections. Yadav put a red turban (SP colour) on Maurya and Saini while welcoming them to the party.

Speaking at the event, Dharam Singh Saini said, “We all are joining SP today and to save the Constitution, democracy and the interest of Dalits, backwards. We will make you the next CM.” “We will make you take the UP CM’s oath on March 10 and India’s PM in 2024,” he added.

Maurya said it was the day of the confluence of ‘Samajwad’ (socialism) and Ambedkarvaad (BR Ambedkar’s philosophy).

While two of the three BJP ministers who recently quit the ruling were present on the stage, the third one, Dara Singh Chauhan, was not seen.

Eleven BJP MLAs – including three ministers – have quit the BJP since Tuesday. It started with the exit of top minister SP Maurya, followed by three MLAs close to him on the same day – Bhagwati Sagar, Raushan Lal Verma, and Brijesh Prajapati.

All three UP ministers who have quit are key OBC (Other Backward Class) leaders, claiming that the interests of the community are being neglected.

Swami Prasad Maurya, who has also joined forces with Akhilesh Yadav, has claimed the party he sides with always wins – first Mayawati’s party, then the BJP, and now Samajwadi Party (may follow the trend).