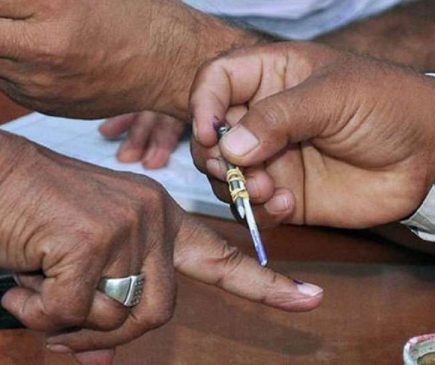 Bypolls News: The three Lok Sabha seats going to polls are Azamgarh and Rampur in Uttar Pradesh, and Sangrur in Punjab

Bypolls to three Lok Sabha and seven assembly seats, across six states, is underway, while the votes will be counted on June 26. The three Lok Sabha seats going to polls are Azamgarh and Rampur in Uttar Pradesh, and Sangrur in Punjab. The seven assembly seats are Rajinder Nagar in Delhi, Mandar in Jharkhand, Atmakur in Andhra Pradesh and Agartala, Town Bordowali, Surma and Jabarajnagar in Tripura.

Sangrur, Azamgarh and Rampur are among the three key seats where polling is being held. In Sangrur, the seat that fell vacant after Bhagwant Mann became the chief minister, the AAP has nominated Gurmail Singh, while the Congress has fielded Dalvir Singh Goldy and the Bharatiya Janata Party (BJP) Kewal Dhillon. Shiromani Akali Dal (Amritsar) has fielded its chief Simranjit Singh Mann against Shiromani Akali Dal’s Kamaldeep Kaur. Kaur is the sister of Balwant Singh Rajoana, a convict in former Punjab chief minister Beant Singh’s assassination case.

In Azamgarh, vacated by SP chief Akhilesh Yadav, the fight is among Akhilesh’ cousin Dharmendra Yadav, BJP’s Dinesh Lal Yadav aka Nirahua and the Bahujan Samaj Party’s Shah Alam aka Guddu Jamali. In Rampur, the former constituency of Azam Khan, Khan’s loyalist Asim Raza is up against BJP’s Ghanshyam Lodhi. Congress is not contesting.

HERE ARE OTHER BYPOLL-RELATED UPDATES:

Sangrur: Amid tight security, the polling began at 8 am and will continue till 6 pm, officials said, adding the counting of votes will be taken up on June 26. There are 15,69,240 eligible voters — 8,30,056 men, 7,39,140 women and 44 from transgender community — in the Sangrur parliamentary constituency.

A total of 16 candidates, including three women, are in the fray. The bypolls come at a time when the Aam Aadmi Party (AAP) is facing Opposition heat over the law and order issue and the killing of Punjabi singer Sidhu Moose Wala.

Azamgarh & Rampur: Over 35 lakh people are eligible to vote in the bypolls and will be deciding the fate of 19 candidates. The polling started at 7 am and will continue till 6 pm, the office of the Chief Electoral Officer said.

According to an official statement issued here by the Election Commission, two general and as many expense observers have been deputed by it to keep an eye on the polls. Besides, 291 sector magistrates, 40 zonal magistrates and 433 micro-observers have also been deputed, it said.

For ensuring security and peaceful conduct of the polls, adequate number of central and state forces have been deployed. The responsibility for the security of EVMs and strongrooms has been given to central forces. According to officials, 13 candidates are in the fray from Azamgarh, where 18.38 lakh people are eligible to vote. Six candidates are contesting from Rampur, which has 17.06 lakh voters.

In Azamgarh, of the 18.38 lakh voters, 9,70,249 are men, 8,67,942 women and 36 third gender. Officials said 2,176 booths are set up at 1,149 polling stations of the constituency, where an estimated 15 per cent of the residents are Muslim. All four assembly constituencies-Azamgarh, Mubarakpur, Sagdi, Gopalpur and Mehnagar-falling in this Lok Sabha seat were won by the SP in the recent assembly elections. During the 2019 Lok Sabha elections, there was an alliance between the SP and the BSP, and Akhilesh Yadav had won easily, getting 6.21 lakh votes against BJP’s Dinesh Lal Yadav Nirahua’, who had got 3.61 lakh votes.

Rajinder Nagar in Delhi: Voting began Thursday morning for the bypoll to Rajinder Nagar in Delhi, largely being seen as a battle between a confident AAP and a spirited BJP for the crucial assembly constituency. A total of 1,64,698 voters are eligible to exercise their franchise in the bye-election, in which 14 candidates are in the fray, with water shortage and the city government’s liquor policy among the key election issues.

The two major contenders — the AAP and the BJP have exuded confidence that their candidates will emerge victorious in the bypoll with a huge margin. Polling began at 7 AM amid tight security arrangements and is scheduled to be held till 6 PM.

Jharkhand: Polling began at 7 AM for the by-poll to Mandar assembly seat in Jharkhand’s Ranchi district amid tight security arrangements, an election official said. Voting is taking place in 433 polling stations, with 141 booths having been declared hyper-sensitive, 218 as sensitive, and 55 as vulnerable, he said, adding polling will continue till 4 PM.

Over 3.54 lakh voters, including 1.75 lakh women, are eligible to exercise their franchise in the by-election to decide the electoral fate of 14 candidates in the fray. The votes will be counted on June 26. More than 3,000 security personnel, including Jharkhand Armed Police (JAP), CRPF, and SSB, have been deployed.

The by-election was necessitated after the disqualification of Bandhu Tirkey as an MLA in the wake of his conviction in a corruption case. Congress has fielded Bandhu’s daughter, Shilpa Neha Tirkey, as the common candidate of the JMM-led alliance, while BJP has nominated former legislator Gangotri Kujur from the seat.

An independent candidate Dev Kumar Dhan, with backing from Asaduddin Owaisi’s All India Majlis-e-Ittehadul Muslimeen (AIMIM), is also in the fray.

Tripura: By-elections to four assembly seats in Tripura began amid tight security arrangements, an election official said. Polling to the Agartala, Town Bardowali, Surma and Jubarajnagar seats is taking place in 221 booths, and it will continue till 5 PM.

A total of 25 companies of central forces, apart from Tripura State Rifles (TSR) have been deployed. As many as 1,89,032 voters are eligible to exercise their franchise to decide the electoral fate of 25 candidates in the fray.

The by-elections in Agartala and Town Bardowali constituencies were necessitated after Sudip Roy Barman and Asish Saha quit as BJP MLAs and joined the Congress in February. Surma seat in Dhalai district fell vacant after BJP legislator, Asish Das, was disqualified by Speaker Ratan Chakraborty and by-poll to Jubarajnagar was necessitated following the death to sitting CPI(M) MLA Ramendra Chandra Debnath.

Chief Minister Manik Saha, who is not a member of the assembly, is contesting from Town Bardowali constituency against Congress nominee Asish Saha. Trinamool Congress and Left Front have fielded candidates in all the four seats. The votes will be counted on June 26.