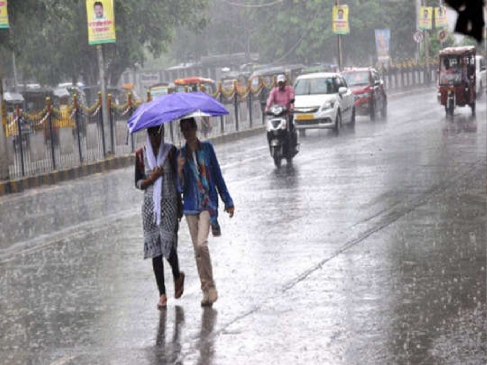 The India Meteorological Department (IMD) has issued orange alert predicting heavy rains in Maharashtra and Goa till June 25. Delhi, which received rains on Wednesday, is likely to receive downpour over the weekend. The southern states of Tamil, Karnataka and Kerala are also expected to experience rains, the weather department said.

Here are the latest weather updates from across the country:

Another spell of pre-monsoon activity is likely to start Sunday. Meteorologists said the southwest monsoon will reach Delhi around its usual date, June 27, and the rain deficit will be compensated for by June end. Pre-monsoon showers in the last few days brought down the rain deficit in Delhi. The city has gauged 23.8 mm of rain as against the normal of 38.3 mm since June 1, when the monsoon season starts.

With the prediction of extreme rainfall, the IMD issued an orange alert for coastal areas of Maharashtra and Goa till June 25. So far, several areas near Maharashtra, Goa and northern Karnataka coast have witnessed heavy to very heavy rains.

“Under the influence of offshore trough and strong westerly winds along the west coast in lower tropospheric levels, fairly widespread/widespread rainfall with thunderstorm/ lightning is very likely over Karnataka, Konkan and Goa, Kerala, Mahe, and Lakshadweep and scattered to fairly widespread rainfall is likely over central Maharashtra, Marathwada, Andhra Pradesh, Yanam, Telangana, Tamil Nadu, Puducherry, and Karaikal during next five days,” the IMD said in its bulletin.

The flood situation in Assam remained grim on Wednesday as 12 more people were killed and 55 lakh people affected across 32 districts with the rising Brahmaputra and Barak rivers inundating new areas, officials said. Four people died in Hojai, three each were killed in Barpeta and Nalbari, and two people lost their lives in Kamrup, they said.

With these deaths, the toll in this year’s flood and landslides rose to 101, they added. The flood situation in the three districts of Barak Valley — Cachar, Karimganj and Hailakandi — remained critical as the water levels of Barak and Kushiara rivers continued to rise, inundating vast tracts of land, officials said.

As per a bulletin of the Assam State Disaster Management Authority (ASDMA), 54,57,601 people have been affected by the floods in 32 of the 36 districts in the state. Among the worst-affected districts are Barpeta where 11,29,390 people are suffering, Kamrup where 7,89,496 people are affected and Dhubri where 5,97,153 people are hit by the devastation.

CHENNAI SEES HEAVIEST RAINFALL IN JUNE IN A DECADE

More rains have been predicted for Chennai as well as other parts of Tamil Nadu, as southwest monsoon has settled over the state.