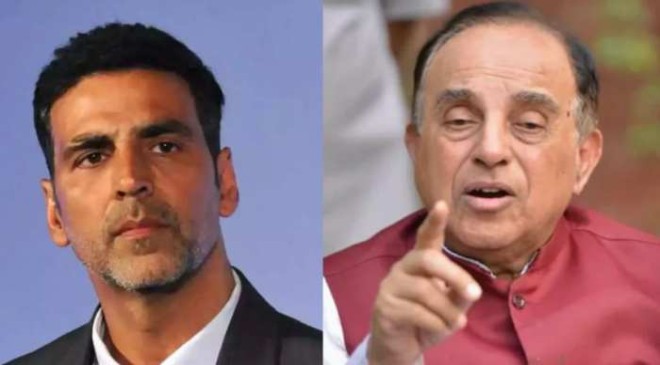 The upcoming film of Akshay Kumar-Jacqueline Fernandez and Nushrratt Bharuccha ”Ram Setu’ has reportedly landed in trouble as BJP leader Subramanian Swamy announced today that he is suing the actor and the makers for the ‘falsification in the portrayal of Ram Setu issue’ in the film.

NEW DELHI: Actor Akshay Kumar’s action-adventure drama film ‘Ram Setu’ has entered controversy much ahead of its release. BJP leader Subramanian Swamy took to Twitter on Friday (July 29) and announced that he is all set to sue Akshay and the makers of the film for the ‘falsification in the portrayal of the Ram Setu issue’ in their upcoming venture. The BJP leader also stated that he would be seeking compensation from the makers.

In another follow-up tweet, the politician attacked the actor over his nationality and tweeted, “If actor Akshay Kumar is a foreign citizen then we can ask he be arrested and evicted from his adopted country.”

Meanwhile, there is no official reaction or statement from the actor’s team or filmmakers on the matter yet.

The film stars Akshay Kumar, Jacqueline Fernandez, Nushrratt Bharuccha and Satya Dev and follows an archeologist investigating the nature of Ram Setu. The plot revolves around the archaeologist, who has set out to check out whether the Ram Setu bridge is a myth or a reality.

According to the epic Ramayana (7th century BCE to 3rd century CE), Ram Setu is a bridge built by the god Rama’s army of Vanara to reach Lanka to rescue his wife Sita, who was abducted by Lanka’s Rakshasa king Ravana.