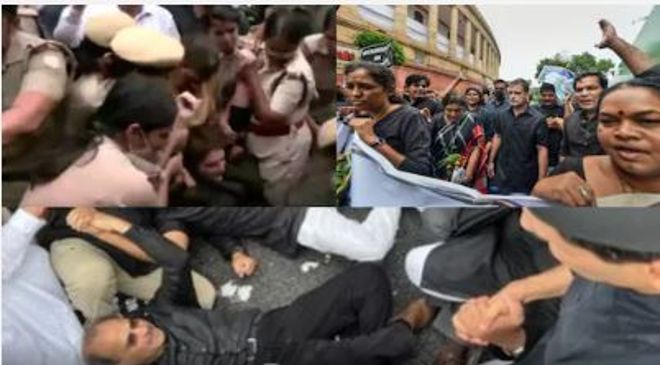 The Congress is protesting against inflation and unemployment in the country, and has blamed the ruling BJP for the ‘death of democracy’

The Congress on Friday carried out nationwide protests against a range of issues, attacking the ruling BJP for the inflation and unemployment in the country. While workers were seen protesting despite showers at the party’s headquarters in Delhi, a similar agitation was witnessed in Mumbai and Assam. The Parliament too, is seeing sloganeering by Opposition party leaders on the issue. Meanwhile, Rahul Gandhi and Priyanka Gandhi were detained by police amid the demonstrations. Rahul had earlier addressed a press conference on the protests, and Priyanka Gandhi had reached the site of the demonstration in Delhi to lend her support.

• Wearing black clothes, Congress leaders hit the streets on Friday to protest against price rise and unemployment with a host of them, including Rahul Gandhi and Priyanka Gandhi Vadra, being detained by police amid dramatic standoffs outside Parliament and the AICC headquarters here. Congress MPs, including former party chief Rahul Gandhi, staged a protest in the Parliament House complex and then proceeded to take out a march towards the Rashtrapati Bhawan as part of the party’s nationwide stir against price rise, the Goods and Services Tax (GST) hike on essential items and unemployment.

The protesting MPs of the opposition party raised slogans against the government demanding that the GST hike on essential items be withdrawn, with party chief Sonia Gandhi standing with the women MPs holding a banner outside gate number 1 of Parliament. The protesters were, however, stopped by the Delhi Police and not allowed to proceed towards the Rashtrapati Bhawan. Sonia Gandhi did not take part in the march. The other MPs were detained by police at Vijay Chowk.

• Also dressed in black, Priyanka Gandhi staged a sit-in protest outside the AICC headquarters here. She jumped across the police barricades put up on the road outside the party headquarters and squatted on the road, with the police personnel asking her to move from there as section 144 of the Code of Criminal Procedure (CrPC) is in force in the entire area of New Delhi district except Jantar Mantar. Amid dramatic scenes outside the AICC headquarters, the Congress general secretary was forcibly put in a vehicle by police and taken away.

In a video shot inside a police vehicle and shared by the Congress with reporters, Priyanka Gandhi said, They think that by putting up a show of power, they can silence us and force us into a compromise. Why will we do that?” “Their ministers cannot see the price rise, so we wanted to walk to the prime minister’s house and show him the high inflation, show him the gas cylinder the price of which is sky high,” she said. “There is no inflation for (Prime Minister Narendra) Modi-ji. He has given away the country’s wealth to a few people…. Only those few people have become very rich, but the common man is suffering. They have a lot of money, they cannot see the price rise. Flour, rice, cooking gas — everything has become expensive,” Priyanka Gandhi said.

• Rahul Gandhi, senior Congress leaders K C Venugopal, Adhir Ranjan Chowdhury and Gaurav Gogoi were among the 64 MPs detained and taken away from Vijay Chowk in a police bus, party sources said. Talking to reporters at Vijay Chowk, Rahul Gandhi said, “We are here to raise the issue of price rise.” He also said “democracy is being murdered”.

He said India is witnessing the “death of democracy” and anybody who raises people’s issues and stands against the onset of dictatorship is “viciously attacked” and put in jail. Addressing a press conference at the AICC headquarters here ahead of the nationwide protest by the Congress against price rise and GST hike on essential items, the former Congress president said the Gandhi family is attacked because it fights for democracy and for communal harmony. Gandhi charged that the sole agenda of the government is that people’s issues such as price rise, unemployment and violence in society must not be raised. “There is no democracy in India and there is a dictatorship of four people, he alleged.

Asked if the MPs were manhandled, he answered in the affirmative. “Our job is to resist these forces, our job is to ensure that democracy in India is protected, our job is to raise the issues of people. We are doing that,” the former Congress chief said.

He alleged that some of the party MPs were even “beaten up” by police. Posting pictures from the protest at Vijay Chowk, Rahul Gandhi tweeted: “Democracy is a memory.” Earlier, in a tweet in Hindi, he said, “This dictatorial government is scared. From the condition of India, from the back-breaking inflation and historic unemployment, from the ruin brought by his policies, the one who is afraid of the truth threatens those who raise their voice!” Several Congress leaders, including Rahul Gandhi, wore black shirts, black kurtas or black bands on their arms.

• At Vijay Chowk, the Congress protesters were seen resisting police personnel who were trying to take them away. Party leader Manish Tewari posted a video message on Twitter from a police bus, saying they were attempting to take out a march to the Rashtrapati Bhavan when they were detained at Vijay Chowk. The Delhi Police has denied permission to the opposition party to stage a protest in the national capital as prohibitory orders are in place in New Delhi district.

• And in Mumbai, prominent leaders such as Balasaheb Thorat, Nana Patole, and Sanjay Nirupam were detained amid protests near the Vidhan Bhavan.

• Assam too saw demonstrations with a high number of attendees. In Jammu, party leaders clashed with police amid the protest.

• The ruling Congress in Chhattisgarh on Friday staged protests across the state. In capital Raipur, the protest is being held at Ambedkar chowk where Chief Minister Bhupesh Baghel, state Congress chief Mohan Markam and other senior leaders were present, said Dhananjay Singh Thakur, party’s state spokesperson. Subsequently, the party workers and leaders would take out a march towards the Raj Bhavan (the Governor’s official residence) in a bid to gherao it, he said.