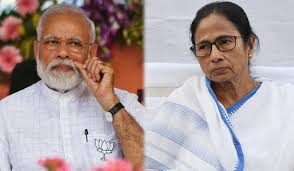 Banerjee is on a four-day visit to Delhi to attend a Niti Aayog meeting on August 7.

West Bengal Chief Minister Mamata Banerjee Friday met Prime Minister Narendra Modi to discuss a number of issues including GST dues for her state. Banerjee, who is on a four-day visit to Delhi to attend a Niti Aayog meeting, will also meet President Droupadi Murmu later in the day. A meeting with the Opposition leaders is also on the cards.

The Niti Aayog meeting is scheduled on August 7. PM Modi will chair the governing council meeting where issues related to agriculture, health and economy would be discussed. Banerjee, who had given the last year’s meeting a miss, is expected to raise the concerns of non-payment of GST dues and federalism issues this time.

The Trinamool Congress supremo arrived in Delhi on Thursday. She met her party’s MPs and discussed the current session of Parliament and the road to the 2024 Lok Sabha elections, news agency PTI reported. Banerjee also sought from her MPs suggestions for naming the seven new districts in West Bengal she announced recently.