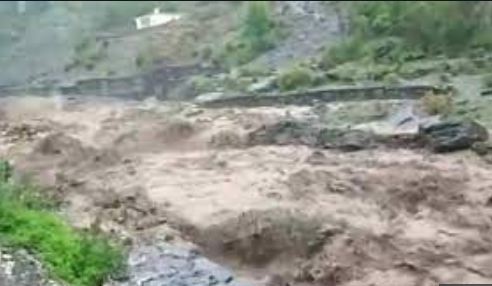 On the midnight cloudburst occurrence in the Lasko river, which is close to the border between India and Nepal, in the Pithoragarh district of Uttarakhand, a woman died and over 30 homes were destroyed.

“About 30 houses have been destroyed in the cloud burst incident and one woman has died,” District Magistrate (DM) Ashish Chauhan told ANI.

The Dharchula Malli market has also been harmed by the cloudburst. Rescue and relief efforts are under progress. Talla village was experiencing waterlogging in the meantime. In Pithoragarh, the Kali River is also beyond the danger threshold. Many houses have been washed away, and some houses are severely affected due to floods. A building also collapsed and got submerged in water owing to a strong current in the river this morning.

The damage caused by the floods in the Kali river has occurred in the villages of both India and Nepal.

More information regarding the incident is awaited.

“We have received reports of water entering various premises and road damage in many areas. SDRF and NDRF carried out relief and rescue and restoration operations,” Commandant of SDRF Dehradun, Manikant Mishra said.

Dhami ordered the State Disaster Management Department and other administration officials to be on alert regarding the devastation following heavy rainfall in the Garhwal division including Dehradun.

The Chief Minister also directed all the concerned departments to reach the affected areas.

“All the people stuck in the village were rescued while some took shelter in a resort nearby,” said SDRF.

(with inputs from ANI)