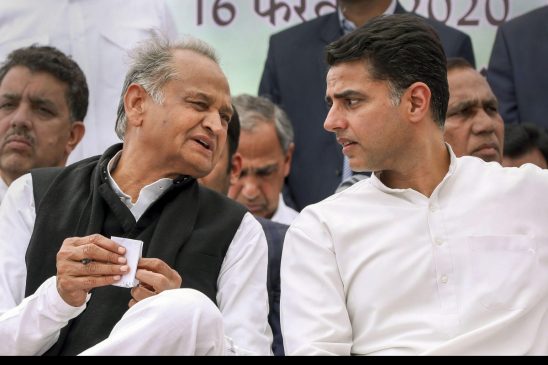 While several top leaders of Congress like Ashok Gehlot and Shashi Tharoor seem to also be ready to contest, chorus is growing louder in the party for Rahul Gandhi’s elevation to the top post with nearly a dozen state units pushing for it now

Demand to see Rahul Gandhi at the top post of Congress has been growing with now a total 11 states units of the party passing resolution backing Rahul for the post of Congress president, election for which is scheduled to take place on October 17.

While several top leaders of Congress like Ashok Gehlot and Shashi Tharoor seem to also be ready to contest, chorus is growing louder in the party for Rahul Gandhi’s elevation to the top post with nearly a dozen state units pushing for it amid uncertainty and suspense persisted over whether he would take on the mantle.

Read More: 5 things to keep in mind before closing a savings account

The Congress units in Goa, Odisha, Jharkhand and Haryana on Tuesday passed resolutions backing Rahul Gandhi for the post of party president, joining at least eight other Pradesh Congress Committees (PCCs) which have rooted for him.

Besides these, party units in Rajasthan, Chhattisgarh, Gujarat, Tamil Nadu, Bihar, Maharashtra, and Jammu Kashmir units of the party have passed similar resolutions.

While Rajasthan Congress leader Sachin Pilot was in Kochi on Tuesday to accompany Rahul Gandhi in party’s ‘Bharat Jodo Yatra’, Rajasthan CM and frontrunner for Congress president poll Ashok Gehlot held a meeting with party MLAs and assured them that he is “not going anywhere”, sources said.

In a subtle message of sorts to Sachin Pilot amid speculation that the chief minister’s post will go to him if Gehlot moves to Delhi as Congress president, the Rajasthan CM said reassured his MLAs that he will keep serving the state wherever he goes and won’t leave the CM post.

Gehlot and Pilot have been in a tussle for quite long now after the latter was accused by the Rajasthan CM of trying to topple his government in 2020.

In 2020, Pilot rebelled against Rajasthan CM Gehlot and shifted to Delhi with 18 MLAs. A month-long standoff ended after the Gandhis intervened.

Rajasthan Chief Minister Ashok Gehlot on Tuesday gave clear signals to Congress MLAs in the state that he has made up his mind to contest for the post of party president if Rahul Gandhi does not contest.

This came four days after Rajasthan Pradesh Congress Committee unanimously passed a resolution for making Rahul Gandhi the party’s national president and on the day  party leadership indicated that the members of the Gandhi family, including interim party chief Sonia Gandhi, are unlikely to name any official candidate.

Sources on Tuesday said the Gandhi family is unlikely to sign on the nomination papers of any candidate as proposers to show that they would remain neutral and that there is no official candidate.

A total of 11 state units of Congress have passed resolution supporting Rahul Gandhi for the post of party president.

Goa, Odisha, Rajasthan, Chhattisgarh, Gujarat, Tamil Nadu, Bihar, Maharashtra, Haryana, Jharkhand and Jammu Kashmir units of the party have passed resolutions, seeking Rahul Gandhi’s elevation as the next Congress president, a post he quit in 2019 after the Lok Sabha debacle.

Congress General Secretary KC Venugopal on Tuesday that it’s up to Rahul Gandhi to decide whether he will contest the election for the party president post, adding that everything will be clear within a week.

Venugopal, who met interim party chief Sonia Gandhi on Tuesday, said, “I had some pending work of the party so I came to meet her.” Venugopal also said that every party worker wants Rahul Gandhi to be the next Congress President.

Congress leader KC Venugopal, who is participating in the Kerala leg of the Bharat Jodo Yatra, departed for the Delhi on Tuesday upon the call by the party’s interim president Sonia Gandhi for the meeting.

Rahul Gandhi and Priyanka Gandhi Vadra do not devote enough time and importance to the Congress party and its leaders, president of the party’s Himachal Pradesh unit Pratibha Singh has said, according to a video posted online.