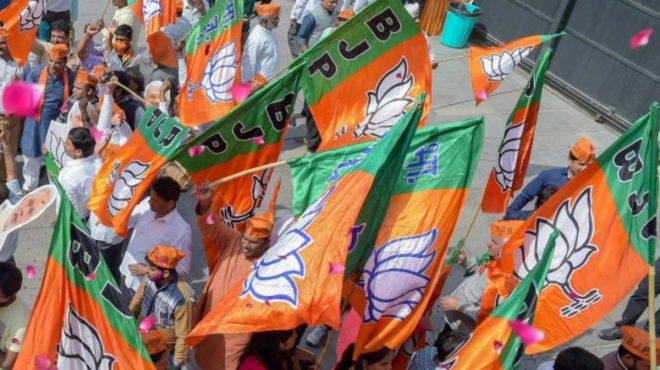 The AAP has claimed that it will upstage the BJP which ruled the civic body for 15 years, with its convener Arvind Kejriwal claiming victory in 200 of 250 wards of MCD.

During his roadshow at Mandoli Road in Ashok Nagar, Union minister Jyotiraditya Scindia alleged that development has reached a “new low” in Delhi in the last almost eight years of Kejriwal government.

“Wherever BJP’s double-engine government has been formed, development is priority,” he said and added that ‘Sankalp Patra’ (manifesto) of the party for Municipal Corporation of Delhi (MCD) polls takes care of all, including slum dwellers and women, in the city.

There is no better person than Prime Minister Narendra Modi as far as development and progress are concerned, he said, referring to infrastructure development in the states ruled by the BJP.

“I suggest, Aam Aadmi Party (AAP) should change its name to ‘Diwan-i-Khas’ (court of elites during Mughal rule)”, Scindia said, asking people to vote for BJP saying development will be first priority if the party comes to power in MCD.

Campaigning for the party, Union minister Nitin Gadkari said that the Central government gave thousands of crores of rupees to the Kejriwal government to clean the Yamuna, “but it is a pity that the river in Delhi has become dirtier than before”.

The ‘Vijay Sankalp’ roadshows by senior leaders were taken out across the city from 14 places, it said.

Gadkari said, “There are two main problems of Delhi – traffic jam and pollution- and the Centre is spending Rs 60,000 crore to solve both the problems.

“The people of Delhi know that BJP is the symbol of development and they will vote for the party in the MCD polls,” Gadkari asserted.

The AAP has claimed that it will upstage the BJP which ruled the civic body for 15 years, with its convener Arvind Kejriwal claiming victory in 200 of 250 wards of MCD.

The elections for MCD will be held on December 4 and the results will be declared after counting of votes on December 7.