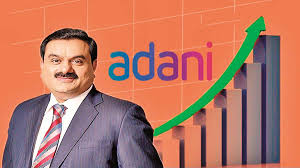 WHEN mutual funds shy away from Adani Group companies, when their shares are tightly held, one investor finds it attractive: the government-owned Life Insurance Corporation of India.

In just eight quarters since September 2020, LIC has increased its shareholding sharply in four of the seven listed Adani Group companies, and in at least one of them almost six-fold.

Filings of the Adani Group companies to the stock exchanges reviewed by The Indian Express show that the total value of LIC’s holdings in these seven companies stood at Rs 74,142 crore as on date. This is 3.9 per cent of the Adani Group’s total market capitalisation of Rs 18.98 lakh crore.

Read More: LIC pension scheme: Invest once in THIS scheme and get lifetime of benefits

Read More: Atal Pension Yojana: You can get up to Rs 5000 every month if you’re married, know how

holdings in Adani Group companies at the closing price Thursday, accounts for 7.8 per cent.

* From less than 1 per cent in flagship Adani Enterprises LIC’s stake rose to 4.02 per cent.

* In Adani Transmission, LIC shareholding rose to 3.46 per cent from 2.42 per cent

* In Adani Green Energy, it has increased to 1.15 per cent from less than 1 per cent.

* The only exceptions are Adani Ports, where LIC holding is flat at 9.61 per cent, and two other firms Adani Power and Adani Wilmar, in which it is under 1 per cent.

Reflecting this increase in shareholding and stock prices, the worth of LIC’s shareholding and its value of LIC’s holding in the Adani Group companies has multiplied 10 times since September 2020: From just Rs 7,304 crore, or 1.24 per cent of the insurer’s equity AUM (assets under management), to Rs 74,142 crore, or 7.8 per cent now.\

This stands out for the following reasons:

* In the insurance sector, LIC is the overwhelming No. 1 when it comes to investing in Adani Group companies. As on December 1, 2022, its Rs 74,142 crore is 98.9 per cent of the entire insurance industry’s investment in the group.

* LIC’s investment is more than five times the value of the holdings of all equity mutual funds in Adani Group companies. As of October 31, 2022, just Rs 15,701 crore, or barely 1 per cent, of equity funds’ total assets of Rs 15.22 lakh crore was invested in Adani Group companies – a level, in shareholding terms, that has held since September 2020.

The Indian Express sent an email to the LIC spokesperson seeking response on the insurer’s significant purchases of Adani stocks. No response was received.

Incidentally, LIC holds 3.98 per cent of the aggregate market capitalisation of Tata Group companies (Rs 21.91 lakh crore), and mutual funds as a whole, hold 4.9 per cent.

The Tata Group companies and the Adani Group are the top two in terms of market capitalisation followed by RIL.