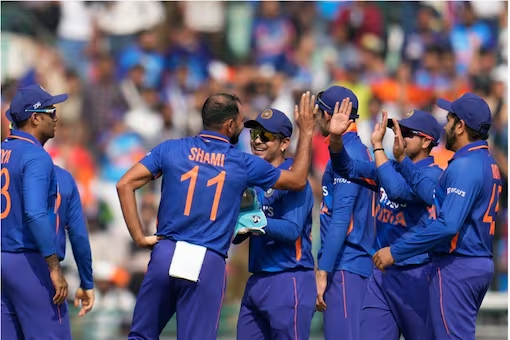 It was the pacers who set up the foundation of the series-clinching victory as Mohammed Shami led the attack from the front with his three wickets.

Team India produced a dominant show with both bat and ball to completely outclass New Zealand with an 8-wicket victory in the second ODI match at Shaheed Veer Narayan Singh International Stadium, Raipur. Skipper Rohit Sharma made a mockery of the 109-run target with his 51-run knock to dominate the Kiwis on Saturday. The swashbuckling opener slammed the bowlers left, right and center to help India register the win in just 20.1 overs. The hosts have taken a 2-0 unassailable lead in the three-match series now.

Read More: ‘Unlike Australia and England, India are going to be short-changed…’: Ashwin on Rohit Sharma-led side’s ODI WC chances

Shubman Gill, who slammed a magnificent double century in the series opener, played the anchor’s role in the chase when Rohit was in the middle. After Rohit’s departure in the 15th over, Gill started playing his shots and took India over the line with ease.

Henry Shipley claimed the first wicket for the visitors in Raipur as he trapped Rohit in front of the wicket with an in-swinging delivery. The Indian skipper hit 7 fours and 2 sixes during his 50-ball stay in the middle which also included a reverse-sweep four. Batting maverick Virat Kohli (11) looked in good touch but was stumped by Tom Latham on Mitchell Santner’s delivery. Gill (40*) and Ishan Kishan (8*) remained unbeaten to help India claim a massive victory.

While it was the pacers who set up the foundation of the series-clinching victory as Mohammed Shami led the attack from the front with his three wickets as New Zealand were bundled out for just 108 in 34.3 overs.

Shami ran riot with the new ball and the other pacers also complimented him quite well as New Zealand were half down for just 15. Mohammed Siraj was also once again very economical with the new ball as he claimed one wicket for 10 in 6 overs.

Read More: How To Book Tickets For IPL 2023 Online, Paytm And BookMyShow?

Glenn Phillips and Michael Bracewell tried to rebuild the New Zealand innings with a 41-run stand but the Hyderabad’s hero became the victim of Shami’s sharp bouncer. He was dismissed for 22. Mitchell Santner joined hands with Phillips to save New Zealand from the embarrassment of getting bowled out below 100. The southpaw scored 27 runs but Hardik Pandya ended his stay by cleaning him up.

Phillips was the highest scorer for the visitors with his 36-run knock off 52 balls which was quite contrasting to his reputation which is batting at a strike rate over 100 but the situation on Saturday didn’t allow him to get going.

Every Indian bowler registered their name on the wickets sheet as Pandya and Washington Sundar claimed two wickets each. While Kuldeep, Siraj and Shardul Thakur ended up adding one each to their account.