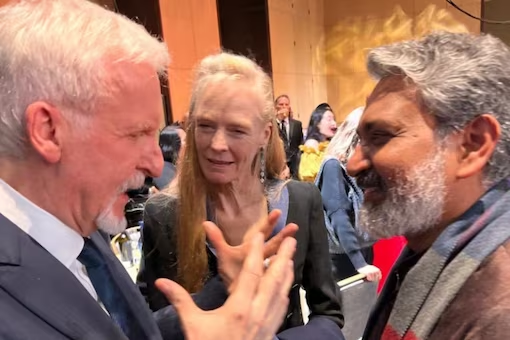 A new clip showing details of SS Rajamouli’s chat with James Cameron has been shared by the RRR team. In the video, Cameron is seen encouraging him to make a Hollywood film.

Legendary filmmaker James Cameron encouraged SS Rajamouli to meet him if ever the RRR director intends on making a Hollywood film. He was seen offering to meet and talk to Rajamouli in a newly released extended clip of the ace filmmakers’ meet at the Critics Choice Awards. While it was previously revealed that Cameron was praising the film during his chat with Rajamouli, the new footage gives a closer look at their chat.

The Avatar director stood with his wife and broke down the film with Rajamouli. The Baahubali helmer fanboyed over Cameron, telling him that he has watched all his films and he is a ‘big inspiration’ in his life. Thanking Rajamouli for his words, Cameron analysed every detail of the storytelling. Cameron was evidently smitten by the film. His wife Suzy went on to reveal that Cameron watched RRR twice — first by himself and second when his wife was watching it.

“Now watching all your characters, it’s just like such a feeling to watch them and your set up, fire, water, story. Reveal after reveal. And then you show what happened in the backstory. It’s like all of them are a homely set up. Why he’s doing what he is doing. And the twists and turns and the friendships and eventually it gets to a point where he can’t kill him when the other reverses. It’s just so powerful. And I loved the fact that you just threw the whole thing , the whole thing, its a full show. I loved that!” he said.

“These words from you are more than an award for me. I mean, I can’t believe that you saw the film, and you’re analysing my film,” Rajamouli confessed. Cameron also spoke with MM Keeravani and lauded him for his music. “The score. It’s kind of amazing because I like the music to kind of stay out of the way and kind of come in and support when the audience is already feeling something so it builds the theme. But you’re using music very differently. He opens his eyes and boooom! And you go with it. You feel like standing up. There are moments in the film where I just had to get up. I’m talking about watching at home. I’m standing up,” he said.

Cameron ended the chat by telling Rajamouli, “If you ever wanna make a movie over here, let’s talk.”