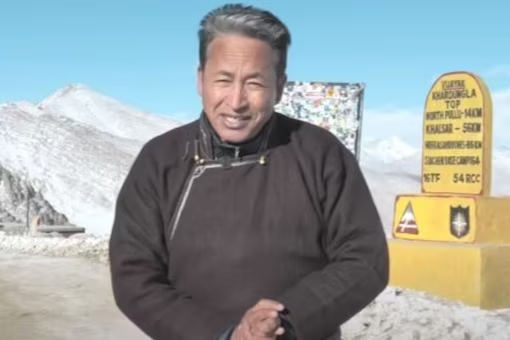 Sonam Wangchuk, who inspired Aamir Khan’s character in 3 Idiots, will go on one of the toughest hunger strikes to protect Ladakh.

The man who inspired the iconic Aamir Khan character Phunsukh Wangdu in the Bollywood blockbuster 3 Idiots is letting people know all is not well in Ladakh. Engineer and education reformist, Sonam Wangchuk has urged Prime Minister Narendra Modi to safeguard the eco-fragile Ladakh. To raise awareness of this emergency, Sonam plans to sit on a 5-day Climate Fast at minus 40 degrees Celsius from January 26. In its preparations, he shared a clip of his successful test run at minus 20 degrees Celsius. The test run took place on his rooftop at Phyang at an altitude of 11,500 feet. For Sonam Wangchuk, at least his test run went well. After surviving a night out in the below-freezing temperature, he can be heard saying in the clip, “I am alive and happily up. Thank you for all your support. This test went very well, I was not too uncomfortable.”

His tweet read, “All’s well at minus 20°C. Inching closer to my Climate Fast at Khardung La 18,000 ft minus 40°C, starting 26th January…This test was on my rooftop at #HIAL (Himalayan Institute of Alternative Ladakh) Phyang at 11,500 ft. #SaveLadakh.”

Check out the clip here:

Social media users showed their unwavering support towards the cause Sonam Wangchuk is hoping to raise awareness about. Many were still concerned about the well-being of the education reformist for going on one of the most difficult hunger strikes. Others wished him well for this tough challenge. A Twitter user wrote, “Take care of yourself ka lae. People will never forget your contribution towards Ladakh. We shall overcome someday.”

Read More: Teachers Can Apply In This Gujarat School Only After Solving The Maths Equation

Another user tweeted, “World-renowned personality will be going to toughest hunger strike on world highest motorable road Khardung La (18380 ft) from sea level. We support you, sir, thanks for whatever you are going through on the right path for the people and for Ladakh, especially for unemployed youths.”

“I saw your video and understand your concern to protect Ladakh from unplanned mining and industries. You are an innovator and scientist. Why don’t you with your team come up with a developmental proposal that uplifts the people of Ladakh in most and protects the climate,” read a tweet.

Sonam Wangchuk recently told news agency ANI that if measures were not taken, industries, tourism, and commerce will continue to flourish in Ladakh. Yet it will also eventually come to an end. According to him, recent studies from Kashmir University and other research organizations have found that nearly 2/3rd of the glaciers in Leh-Ladakh will go extinct if they are not properly taken care of. A study by Kashmir University has also found that the glaciers surrounded by highways and human activities are melting at an alarmingly faster rate.