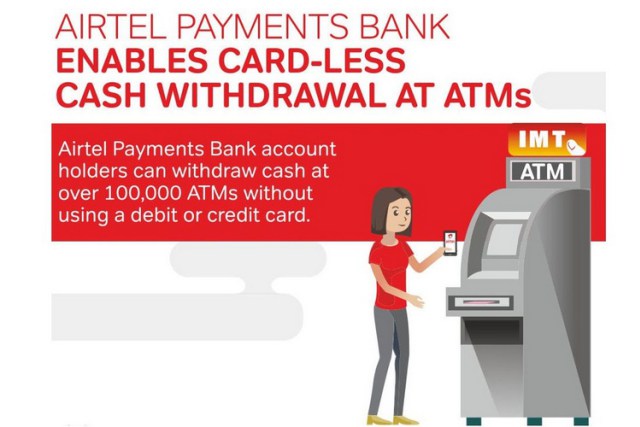 Now the savings account holders of Airtel Payments Bank can withdraw cash at ATMs using just their mobile phone through the card-less cash technology of Empays.

Now the savings account holders of Airtel Payments Bank can withdraw cash at ATMs using just their mobile phone through the card-less cash technology of Empays.

Good news for the customers of Airtel Payments Bank. They can now withdraw cash at over 100,000 ATMs without using a debit or credit card. For this Airtel Payments Bank has entered into a tie-up with Empays, a global provider of cloud-based payment solutions.

According to the payments bank, the tie-up will enable its savings account holders to withdraw cash using just their mobile phone through the card-less cash technology of Empays, called IMT (Instant Money Transfer). The technology can be used for self-withdrawal or for sending money to an intended recipient for ATM cash withdrawal. The service is available to both feature phone and smart phone customers through USSD and MyAirtel app.

Currently more than 100,000 ATMs of some of the largest banks in India such as the State Bank of India, Axis Bank and PNB are linked to the IMT system for card-less cash withdrawals. The network is licensed by the Reserve Bank of India as a payment system and is the only one-of-its-kind in the country, according to a press release by Airtel Payments Bank.

The release claims that IMT or Instant Money Transfer is the largest interoperable card-less cash ATM network in the world, built and run by Empays Payment Systems India Pvt Ltd. The facility is at present available for Airtel Payments Bank account holders at over 20,000 IMT-enabled ATMs in India and will cover more than 100,000 ATMs by the end of this year.

Commenting on the launch, Anubrata Biswas, MD and CEO of Airtel Payments Bank, said, “Our tie-up with Empays is an important step that enables our customers to realize digital, phone-based cash withdrawals at over 100,000 ATMs, through either USSD or the MyAirtel App. We will accelerate such steps to make digital banking with Airtel Payments Bank simple and easy.”