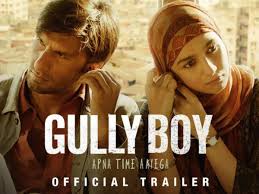 Zoya Akhtar’s directorial, starring Ranveer Singh and Alia Bhatt, is receiving rave reviews. But the film has become the latest victim of piracy. The entire film was leaked online by Tamil Rockers hours after its release on Thursday.

Tamil Rockers is a website known for leaking new movies online. The website is regularly blocked by The Department of Telecommunication under the directive of the Government of Tamil Nadu but the administrators of the site keep moving to new domains.

Gully Boy, inspired by the lives of rappers Divine and Naezy, was also a part of the prestigious Berlin Film Festival.

Rajeev Masand of News18 rated the film four out of five and wrote, “…authentic, in fact, is a word that’s thrown around quite often in the film. The rappers have integrity and authenticity that is important to them, and they take great pride in repeating that over and over again. Authentic is also the word I’d use to describe the storytelling and the filmmaking. This is a world that the writers have clearly embedded themselves in. This is not an outsider’s view of these people and their lives and homes; this is a keenly observed portrait, a lived-in world and that’s why it never feels fake. The dialogue, the lingo, the punchlines, they’re real.”