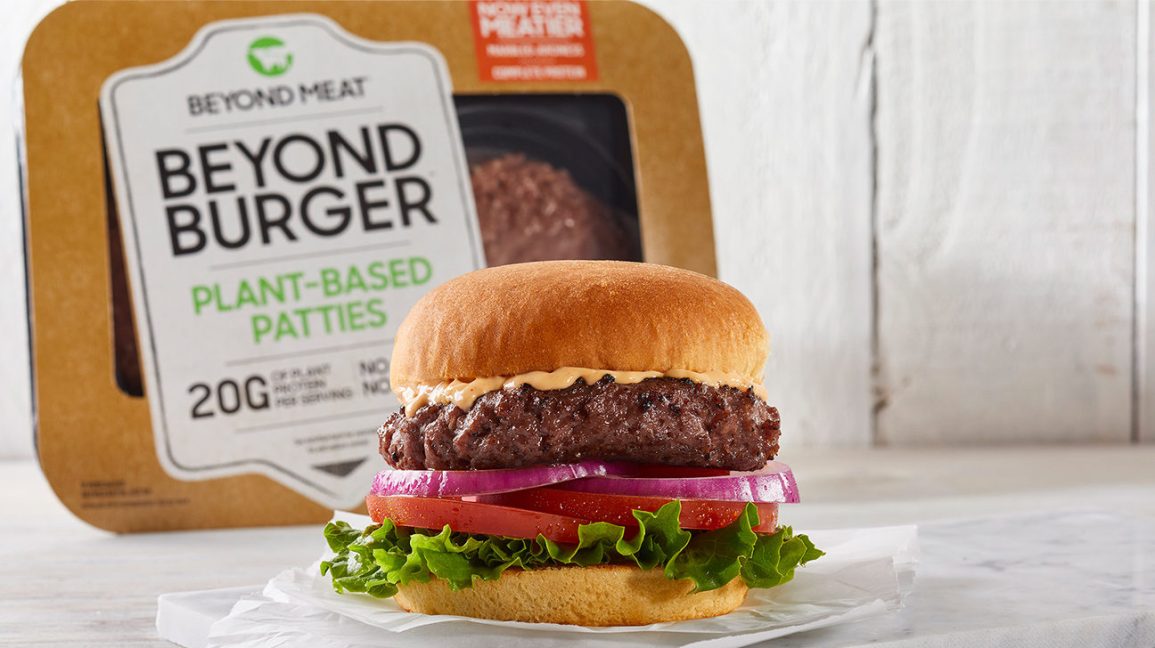 Just in time for summer grilling season, the faux-meat burger craze is getting meatier.

Earlier this month, plant-based meat products purveyor Beyond Meat introduced an update to their flagship meat-free product, the Beyond Burger.

This “now even meatier” version promises three improvements over their first burger, which hit store shelves in 2016.

First, it has more “marbling,” a nod to the natural fat layers of ground beef that account for a great deal of a real burger’s juicy, mouthwatering texture. The Beyond Burger marbling is made possible with coconut oil and cocoa butter.

The company also tooled around with ways to make the burger act more like real meat during cooking and added an apple extract to help the food turn from red to brown as it cooks.

Beet juice extract still gives the look of “bleeding” if you’re into that sort of aesthetic.

Lastly, the burger brand added a protein-rich blend of ingredients to the patties to give them a more “fibrous” appearance and make them a source of complete proteins, an important step for plant-based eaters looking to get a good boost of their daily protein from this food.

This new introduction comes as Beyond Meat and their largest competitor, Impossible Foods, are racing to fill restaurants, store shelves, and dining halls with their plant-based beefy burger look-a-likes.

Today, Beyond Meat says they’re in more than 35,000 outlets, from Carl’s Jr. and Del Taco to hotels and grocery store shelves of some of the country’s biggest brands, including Target and Whole Foods.

Impossible Foods is hot on their heels with placements in White Castle, Burger King, and Qdoba.

But despite their sizzling sales — Beyond Burger brought in $87.9 million in 2018, up from $32.6 million in 2017 — not every health-focused eater is sold on these red meat replacements.

Sure, experts have been telling us for years now that humans should eat less meat in general to improve their health and reduce greenhouse emissions, which may be speeding up climate change.

But at the end of the day, these burgers are still highly processed foods. Those generally get a thumbs-down from nutritionists and dietitians alike.

“I definitely think it’s a better alternative to so many out there,” said Jayne Williams, integrative health and nutrition coach.

“As with anything processed, I go to a rating scale: good, better, best. This would definitely fit into the ‘better’ category. While being processed, it doesn’t contain any soy or gluten, which gives it a thumbs-up.”

She added, “It does contain some ‘shelf stabilizers,’ which in my opinion aren’t the absolute healthiest, and for those who have severe autoimmune [conditions], I would be cautious. ‘Best’ would clearly be making your own, but in our fast-paced world, this is surely a win.”

Beyond Burger may not solve everything — for humans’ health or the planet’s — but it’s a good step.

“The typical American diet focuses primarily on animal-based proteins like poultry and red meat and is a contributor to chronic inflammation, which is at the root of most health conditions including heart disease, diabetes, autoimmune diseases, joint issues, and brain health,” said Carolyn Williams, PhD, RD, author of “Meals That Heal: 100+ Everyday Anti-Inflammatory Recipes in 30 Minutes or Less.”

“Looking for ways to substitute more fish and plant-based proteins, like these burgers, is really something we should all be doing — even meat eaters.”

Lest you think Beyond Burger and Impossible Burger get nutritional hall passes because they’re meat-free, Carolyn Williams cautioned that even these alternatives aren’t without their drawbacks and nutritional concerns.

Here is what she and other nutrition experts outline as concerning factors of these faux-meat burger alternatives.

A burger is still a burger

Their nutrition profile may have some shining moments — Beyond Burger has no cholesterol and less saturated fat than beef — but fat, calories, and other numbers may be as high (or higher) as regular patties, especially when they’re used to make a burger.

People should still treat these sandwiches like the indulgence they are.

Sodium can be very high

“My main concern is the questionably high sodium content of these veggie-based alternatives, which can rank up to five times the amount of a regular burger patty,” said Rachel Fine, RD, owner of To The Pointe Nutrition, a nutrition counseling firm in NYC.

“With hypertension being a risk factor for cardiovascular disease, I would be wary of consumers feeling a somewhat ‘health halo’ around these alternatives, and eating them frequently.”

“Impossible Burgers are largely made with coconut oil, which supplies a significant amount of saturated fat,” Fine said. Beyond Burger is using that ingredient for a “marbling” effect.

“The American Heart Association advises that we be wary before choosing coconut oil due to its high saturated fat content.”

Unlike black bean and quinoa-based veggie burgers, the Beyond Burger and Impossible Burger have a collection of ingredients that are designed to do one thing: mimic meat. They aren’t providing the natural vitamins and minerals that some premade burgers with actual vegetables do.

“There are lots of other plant-based protein options if these burgers don’t appeal to you,” Carolyn Williams said.

“A burger made with lean beef has around the same calories, fat, and saturated fat as a Beyond Burger — maybe even a little less — so don’t feel pressure to give up real burgers altogether. Just look for other ways to substitute protein from beans, soy, and nuts in place of meat and poultry.”

Dr. William Li, a physician scientist and author of “Eat To Beat Disease: The New Science of How Your Body Can Heal Itself,” concurs.

“Eating small amounts of real meat is probably OK, but make sure your diet is predominantly plant-based, which will activate health defenses against the occasional real burger.”