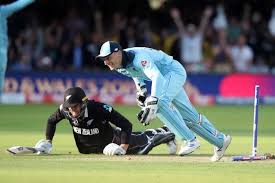 New Zealand coach Gary Stead feels the International Cricket Council should consider the option of a having a tied result in case both the finalists cannot be separated if the teams are tied on the same scores after the final and the Super Over just like what happened in the World Cup 2019 final between his team and England.
New Zealand and England both ended up with 241 runs in their allotted 50 overs and had to play out a Super Over but even that couldn’t separate the two sides as both scored 15 runs each.

It was then that ICC’s rules came into play which stated that in case of a tie in the Super Over, the team which has hit the most boundaries in the final and in the Super Over would be declared winners.

England prevailed because they had hit a total of 26 boundaries – fours and sixes scored across both the 50 overs and the Super Over – compared with New Zealand’s 17, a decision which left Kiwi fans and cricket pundits unhappy.

“Perhaps when you play over a seven-week period and can’t be separated on the final day, that is something should be considered as well.

“But again that’s one consideration over a whole lot of things that went on over the World Cup. Everything will be reviewed, and I think that it’s a good time to do it now. But probably just let the dust settle for a while,” New Zealand coach Gary Stead said.

New Zealand’s batting coach and former all-rounder Craig McMillan is of the opinion that sharing the trophy in such a case would have been the right thing to do.

“It is not going to change yesterday’s result. But what is probably fair to say at the end of seven weeks in a big tournament like this, when you have two teams can’t be separated after a 50-over match and then a Super Over and neither team did actually lose in many ways in terms of runs scored.

“Then perhaps sharing the trophy would be the right thing to do. Wasn’t to be yesterday, which we all are disappointed with. But it is sport and those were the rules,” McMillan said.

Chasing 242 for victory in the final, Ben Stokes’ scintillating 84 not out helped the hosts tie the see-saw contest, forcing the Super Over where more nail-biting excitement unfolded.

Jos Buttler and Stokes took 15 runs off Trent Boult’s Super Over without losing their wickets.

New Zealand also scored 15 runs off Jofra Archer’s over but England won on boundary count, triggering wild celebrations at Lord’s as the hosts capped a stunning turnaround and ended a 44-year wait to bring home the World Cup trophy.