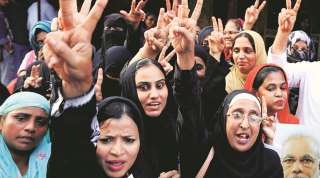 The Triple Talaq bill, passed thrice by the Lok Sabha over the last 19 months, finally received the approval of the Rajya Sabha on Tuesday amid walkouts by BJP allies JD(U) and AIADMK.

The Muslim Women (Protection of Rights of Marriage) Bill, 2019, which makes the practice of instant triple talaq a penal offence, and for which ordinances were issued three times, was cleared by the House with 99 votes in favour and 84 opposing it.

The Rajya Sabha had earlier rejected an Opposition-sponsored motion to send the bill to a Rajya Sabha Select Committee with 100 votes against it as compared to 84 in favour.

Lok Sabha had passed the triple talaq bill last week with 303 votes in favour and 82 opposed, where there was high drama when SP’s Mohammad Azam Khan made objectionable remarks about BJP’s Rama Devi, who was chairing the proceedings.

Once granted assent by the President, the practice of instant divorce by Muslim men will be punishable by a jail term of up to three years.

While fence-sitter BJD supported the legislation, JD(U) and AIADMK walked out, lowering the majority mark which normally stands at 121. The ruling NDA has 107 members in the 242-member Rajya Sabha. The NDA was also helped by the absence of some members of SP and BSP as well as those of Telangana Rashtra Samithi (TRS) and YSR Congress.

Calling it a historical step, Prime Minister Narendra Modi said passage of the triple talaq bill was a victory of gender justice and would further equality in society. “An archaic and medieval practice has finally been confined to the dustbin of history! Parliament abolishes Triple Talaq and corrects a historical wrong done to Muslim women. This is a victory of gender justice and will further equality in society. India rejoices today!” PM Modi tweeted.

Modi further said the abolition of triple talaq would contribute to women empowerment. “This is an occasion to salute the remarkable courage of those Muslim women who have suffered great wrongs just due to the practice of Triple Talaq. The abolition of Triple Talaq will contribute to women empowerment and give women the dignity they deserve in our society,” Modi said.

The debate that went on for almost five hourswitnessed a slugfest between Law Minister Ravi Shankar Prasad and Leader of the Opposition Ghulam Nabi Azad, who termed the bill a “politically motivated” move to destroy Muslim households.

Justifying the three-year jail term for Muslim men, Prasad said the government could not leave in lurch women who have been divorced by triple talaq via WhatsApp or other such means.

Replying to Azad, the Law Minister cited the Shah Bano case and said the Congress leader should think of why his party could never win a majority following the peak of 400-plus seats it won in 1984 Lok Sabha polls.

“I am a minister of the Narendra Modi government and not Rajiv Gandhi government. More than 20 Islamic nations have regulated triple talaq” Prasad said.

Azad said the Opposition had been forced to vote against the bill after the government did not accept their demand to send it to a select committee and make triple talaq a civil offence.

Under Opposition pressure, the government had included certain safeguards in the bill, such as adding a provision for bail for the accused during trial. A provision was added to allow the magistrate to grant bail after hearing the wife .

A five-judge Bench of the Supreme Court had struck down instant triple talaq in a complex, layered, split verdict in August 2017. Last week, in the Lok Sabha, Prasad said since January 2017 as many as 574 triple talaq cases and since the Supreme Court order, more than 300 such cases were reported by the media.

Three of the five judges on the Constitution Bench Justices Rohinton F Nariman, Uday U Lalit and Kurian Joseph called the practice un-Islamic and arbitrary and disagreed with the view that triple talaq was an integral part of religious practice.

But the minority ruling of Chief Justice J S Khehar and Justice S Abdul Nazeer underlined the primacy of Muslim personal law and said the practice enjoyed constitutional protection and was beyond the scope of judicial scrutiny.