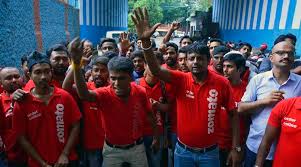 Zomato founder Deepinder Goyal, in an internal mail to employees, has said that the protest by a handful of food delivery executives in West Bengal’s Howrah has nothing to do with food or religion or beliefs , but is about the recent rate card correction .

Since August 5, a section of Zomato delivery executives is on strike over the alleged cut in payment rate. On Sunday, their protest grabbed national headlines after the protesting staff alleged the company was forcing them to deliver food items containing beef or pork, which was against their religious beliefs.

“This ‘protest’, confined to a handful of delivery partners, is limited to the Howrah area… The issue was primarily related to a recent rate card correction in that area, something we routinely do,”  Goyal wrote.
In his letter, accessed by The Indian Express, Goyal added, “Occasionally, a handful of delivery riders don’t understand the rate card corrections and start protesting against the change. In this case in Howrah, instead of constructive engagement with their local Zomato execs (executives), these riders approached a local politician and deliberately framed the issue incorrectly.”

“We know this because we took a look in our order database and there were zero orders from local homes for any item containing pork in the last three months in that entire area. There was one order of a food item containing beef but the customer cancelled that order… There is never a moment when anyone outside of the restaurant kitchen is actually coming in contact with any food. So this alleged protest has nothing to do with food or religion or beliefs,”  read the letter.

Meanwhile, the delivery executives continued their strike on Tuesday after a meeting with the officials of the company failed to resolve the deadlock.

“Last night, we got a call from the company that a meeting has been organised for Tuesday. A five-member delegation of ours went to attend the meet. Senior police officers were also present. We told the company representative about our payment issue and our unwillingness to deliver pork and beef to customers. He said he can’t recommend changes as it is done by senior company officials. One of the senior officials will meet us on August 16, Mohsin Akhtar, one of the protesting executives,” told The Indian Express on Tuesday.

However, Zomato didn’t issue any communication or comment about the meeting.