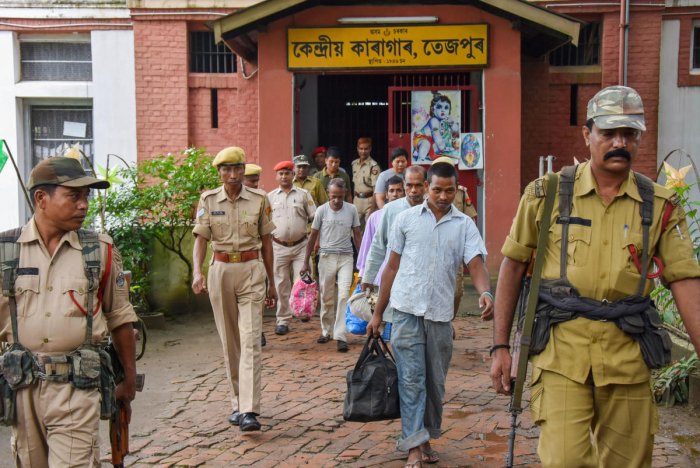 In a direct refutal of Prime Minister Narendra Modi’s statement that there are no detention centres in India (at a December 22, 2019 rally in Delhi), Nityananda Rai, Union minister of state for home, admitted in the Lok Sabha on February 4 to the existence of six such in Assam. However, this is not even the first time the Union home ministry has acknowledged the existence of detention centres in the country.

So does this mean that there is truth to the allegation-often raised during protests against the contentious Citizenship (Amendment) Bill 2019-that “millions of Muslims left out of Assam’s National Register of Citizens (NRC)” are being sent to the detention centres? To put it simply, it’s not a valid charge.

So why do detention centres exist in Assam?

There is a long history behind it. Illegal immigration from Bangladesh-previously known as East Pakistan-has been the bane of Assam from colonial times. As a majority of these immigrants are Bengali-speaking Muslims, the influx gradually changed the demography of Assam, much to the anxiety of the local inhabitants. In 1931, C.S. Mullan, superintendent of the 1931 Census wrote about the influx: “Probably the most important event in the province during the last 25 years, likely to alter permanently the whole structure of Assamese culture and civilization, has been the invasion of a vast horde of land-hungry Bengali immigrants, mostly Muslims from the districts of eastern Bengal.” His statement was backed by numbers: in 1881, the Muslims accounted for a mere 9 per cent of the population; it increased to 19 per cent in 1931 and to 23 per cent in 1941.

This is also the reason why the first NRC was published in 1951 in Assam–to get a count of the illegal immigrants in the state. The NRC was prepared by recording the particulars of all those enumerated during that year’s census. The 1951 NRC estimated the number of migrants from East Bengal at around 1 to 1.5 million-between one-tenth to one-sixth of the total population of the state. However, there is no account of what happened to those who were excluded from the 1951 NRC.

Between 1951 and 1961, Assam’s population leapt by 36 per cent, and by 35 per cent in the next decade as against a national decadal growth of 22 and 25 per cent respectively. In his report in 1963, the Registrar General of Census said 220,691 illegal immigrants infiltrated into Assam. To tackle the illegal influx issue, foreigners’ tribunals (FT) were set up in Assam in 1964. These quasi-judicial courts are governed by the Foreigners Act, 1946, and adjudicate on cases referred to them by the local Foreigner Regional Registration Office (FRRO), which itself works on the recommendations of the Assam Border Police Organisation. There are currently 100 FTs in Assam. For the record, these FTs had declared 126,998 individuals as foreigners till January 25, 2020. Of these, 28,971 entered Assam before 1971, and as per the Assam Accord of 1985, they are not to be deported but must be given time to register themselves as Indian citizens. Yet, only 12,914 foreigners have registered themselves with the FRROs.

So what happened to the rest?

A majority of them, including those who came after 1971, became untraceable. For instance, a white paper published by the Assam government in 2012 reveals that of the 29,237 detected foreigners only 2,442 could be deported or pushed back. Under Section 3(2)(e) and 3(2)(c) of the Foreigners Act, 1946, the central government is vested with the powers to detain and deport a foreign national staying illegally in the country. The government of India has also authorised the state government to set up detention centres to keep illegal foreigners in custody till they can be deported to their country of origin. Yet, there were no detention centres in Assam till 2009 though the first notification to establish them was issued to all states and Union territories in 1998 by the Atal Behari Vajpayee-led NDA government.

Following a 2008 order from the Gauhati High Court–which recorded its displeasure at the “vanishing act” of the illegal foreigners–Assam’s Congress-led state government set up three detention centres, attached to the district jails in the state. There are now six such centres in Assam.

How many people have been kept in these detention centres?

Contrary to popularly imagination, the six detention centres house only 834 individuals, of which 559 are Muslims and 275 are Hindus. In April 2019, the Supreme Court ordered the release of declared foreigners who had completed three years in detention provided they fulfilled certain conditions-two Indians will have to take surety, they will have to sign a bond of Rs 1 lakh, their biometrics will be taken, and they have to furnish a verified address. According to government data, 761 individuals were released from detention centres in 2019.

Then why is the government building a big detention centre in Assam’s Goalpara to accommodate 3,000 individuals?

Many human rights activists have questioned the ad hoc provision of state governments setting up detention centres within jail premises as illegal immigrants are not criminals. A visit in 2016 to one of one of the detention centres–in Kokrajhar–not only offered a glimpse of the pathetic conditions the inmates live in but also raised doubts about the randomness of the functioning of FTs in declaring an individual a foreigner. Ramani Biswas, a 32-year-old woman from Mayong, had been languishing there since 2009 when she, along with her husband, Dilip Biswas, 40, and daughters Kalpana, 15, and Archana, 9, were picked up by the authorities. Her court records show the family ignored notices sent by the FT. What makes the case bizarre is that both Ramani and Dilip’s parents are Indian citizens, as are their siblings.

Giving Ramani company at the detention centre were Minara Begum, 32, from Udarband in Silchar; Momirunessa, 45, from Baghbar in Barpeta; Halima Khatun, 40, from Dhing in Nagaon; Gita Biswas, 50, from Shantipur in Baksa; and Basanti Mahanta, 40, from Bongaigaon. These women were the only ones in their family who had been charged with being illegal migrants. Their husbands, parents and siblings remain Indian citizens.

Legal respite is available to these individuals as FT orders can be challenged in higher courts but what about being forced to live along with criminals inside a jail? Why can’t a foreigner, even if he or she has been living in India illegally, be provided decent living conditions in detention? The Goalpara detention centre, exclusively for illegal foreigners, could actually be a correct executive step towards providing humane living conditions to these inmates. While the Union ministry of home affairs has been instructing the states since 2009 to set up detention centres, one of the circulars sent by the Modi government in 2018 also emphasises that these centres include modern facilities. So a separate detention centre, as the one coming up in Goalpara, may be slightly better news for detainees.

Are the centres then not for those excluded from the NRC published in 2019?

The FTs have been in existence in Assam since 1964 and detention centres since 2009. The NRC published in 2019 has no direct link with either of the two processes. The 1.9 million people excluded from the latest NRC will not automatically be sent to detention centres. There are detention centres in other states where there have been no NRC also. For instance, detention centres or holding centres/ camps for illegal foreign nationals exist in Delhi/ NCR, Punjab, Rajasthan, West Bengal, Gujarat and Tamil Nadu. These are meant to “restrict the movements of foreign nationals staying illegally so that they are physically available at all times for expeditious repatriation”.

Those who have been excluded from the NRC will continue to enjoy all the rights, including that of a voter, till they are declared an ‘illegal foreigner’ by the FTs (the first authority to declare a person foreigner). Those excluded from the NRC will get a chance to file an appeal before a designated FT, which will decide on his/ her status. If not satisfied with the FT order, he/ she can move the higher courts. In case a person doesn’t appeal, the district magistrate may refer to the FT for its opinion on whether the person left out of the NRC in Assam is a foreigner or not within the meaning of the Foreigners Act, 1946.

So while Prime Minister Modi was economical with the facts on detention centres, the narrative that millions of Muslims are being sent to detention centres as a consequence of the NRC is also far from the truth.