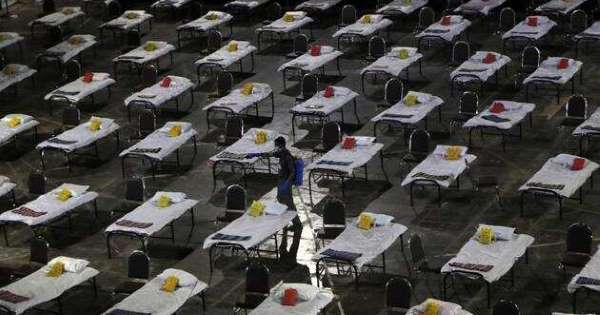 In the 101 days since the world first heard about the mysterious new virus behind Covid-19, a person has, on average, succumbed to the illness every 90 seconds.

On Friday, the toll surpassed 100,000, a milestone that could well be dwarfed soon at the current rate of the pandemic’s growth: fatalities have doubled and the total number of infections grew by 600,000 in the last week alone, according to the Johns Hopkins University Coronavirus Research Center.

In India, national capital Delhi recorded 183 new cases on Friday – the largest single-day jump. Most of these (154), however, were related to the Nizamuddin cluster from where roughly 2,300 have been taken to hospitals and quarantine centres. Overall, the country recorded 855 new cases and 19 new deaths, taking total infections to 7,549 and fatalities to 250.

The numbers, which came on the 39th day of the outbreak in India, represent a steady flow that, while not ballooning in the way they did in many populated countries, threaten to quickly go out of hand. In western countries, the virus tore through in approximately six weeks: the United States and Europe together account for over 77% of all infections and close to 87% of all deaths.

“The attention now should be on lower and middle income countries like India and the sooner you start testing at a widespread level, the better you will know what is going on in your country,” said Bhramar Mukherjee, the head of biostatistics at University of Michigan.

“The acceleration curve in India looks completely different than other countries – India is doubling infections in about six days while a country like UK takes three days,” she said, adding that it is important to determine whether this is because of lack of reporting or other factors such as temperature and genetics.

India is at present in the middle of a three-week lockdown that has brought the economy to a halt and led to a massive spike in unemployment, but is also credited with averting an endemic crisis. The government is likely to retain much of the curbs, maybe even extend the lockdown which is scheduled to end on April 14.

“From an epidemiological perspective, you start seeing an appreciable drop in case counts when you lock down for 42-56 days but that may not be practical. You have to come out of a lockdown soon,” added Mukherjee, who is among a dozen academicians from three American universities studying the disease’s progress in India and other nations.

Since the middle of March, some of the biggest economies of the world have locked down their cities and are now struggling with the question of when to lift some of these curbs and let industries restart to fend off further economic devastation.

The head of the International Monetary Fund warned on Thursday the global economy is headed for the worst recession since the Great Depression of 1930s, and the UN labour organisation said 195 million full-time jobs could be lost in the second quarter alone.

The rate of unemployment in India shot up from 8.41% to 23.81% in the week when the country was forced into a near-complete shutdown, according to estimates by Centre for Monitoring Indian Economy.

Scientists and researchers say the way forward for the world will require new, focussed steps to enforce social distancing that are more sophisticated than population-wide lockdowns. “It is important that we start to think of exiting lockdowns as combination of policies. People will need to be allowed greater social flexibility and there will need to be innovative solutions, such as contact tracing through mobile apps,” said Steven Riley, professor of Infectious Disease Dynamics at Imperial College London, in a video published on Thursday by the varsity’s Abdul Latif Jameel Institute for Disease and Emergency Analytics.

On Friday, Apple and Google — who together control the mobile phone software market almost entirely — said on Friday that they will work together to create contact tracing technology that aims to slow the spread of the coronavirus by allowing users to opt into a system that catalogs other phones they have been near.

They will work together on technology that will allow mobile devices to trade information via Bluetooth connections to alert people when they have been in close proximity with someone who has tested positive for Covid-19.

“Our lives are going to be constrained and restricted for a while everywhere in the world. It is important to be intelligent how we emerge from this, because cases will rise when we do and instead of having pickets, we need to build check dams to handle if there is a flood of cases,” she added.

The unprecedented crisis has been met with unparalleled efforts in the scientific community that has raced to develop a vaccine to protect people from Sars-Cov-2 , the pathogen that causes Covid-19. According to an analysis in the journal Nature Reviews Drug Discovery, five vaccine candidates are in phase 1 clinical trials and 73 in exploratory or preclinical stages. A vaccine, the analysis says, is likely to be ready in early 2021 – the earliest estimate available at present.

At the same time, however, there are many aspects of the pathogen that are still to be known. South Korean officials said on Friday that they had launched an epidemiological investigation after 91 patients thought cleared of the new coronavirus had tested positive again. Jeong Eun-kyeong, director of the Korea Centers for Disease Control and Prevention (KCDC), said the virus may have been “reactivated” rather than the patients being re-infected.

Other Korean experts said patients had likely “relapsed” rather than been re-infected and that false test results could also be at fault, or remnants of the virus could still be in patients’ systems but not be infectious or of danger to the host or others.