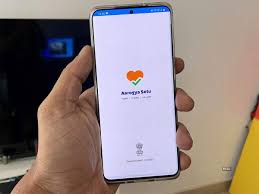 India’s coronavirus disease (Covid-19) contact-tracing app Aarogya Setu (health bridge) became the world’s fastest growing mobile app on Tuesday night with 50 million users in 13 days. Of these, 11 million were in a single day after Prime Minister Narendra Modi urged people to download the application in his third televised address to the nation, according to the Niti Aayog team lead.

The downloads surged from 39 million to a peak of 100,000 per minute on Tuesday morning following Prime Minister Narendra Modi’s 10 am address.

By midnight, 50 million people had downloaded the mobile app launched on April 2 to alert users who are at risk of exposure to Covid-19 infection over the past two weeks.

“We expected to touch 50 million users by April 15, but reached it a day before. There were 11 million downloads on Tuesday, which is the sharpest single-day surge in installations since the app was launched. PM Modi’s announcement led to a spike that peaked at 100,000 registrations per minute in the afternoon, which stabilised at 1,500-2,000 downloads per minute over the rest of the day,” said Arnab Kumar, programme director of frontier technologies, Niti Aayog. He is part of the team that developed the app.

Apart from reaching out and informing users about their potential risk of infection, this “privacy-first by design” app also shares safe behaviours and updated medical advisories about Covid-19 containment in 11 languages.

Singapore has a similar mobile app called TraceTogether for contact tracing. It was launched three weeks ago, and Google and Apple are collaborating to launch a similar contact-tracing initiative.

All these apps convert personal and location data into a random anonymous device identification that is saved for two weeks in your phone and the phones of other users within bluetooth range. That usually comes to around 10 metres for most smartphones.

The data is uploaded on the server and shared with health authorities only when either the user tests positive or is at high risk of infection. It then alerts all other users in the contact chain.

How it works is fairly simple.

“Imagine someone, say Person A, leaves by train to work and then comes back home again. All is well. The next day this person reports symptoms and requires a test, which turns out to be positive, then there is an instant signal which goes to all those people who were close to that person during commuting, at work or at home. And the people who were a little far away are warned,” said Dr K VijayRaghavan, principal scientific adviser to the central government.

This is important because one should not only consider those who are showing symptoms.

“If we do nothing, then this is what happens. A person who is asymptomatic but positive becomes symptomatic, infects other people who also later on become symptomatic and the epidemic spreads. Now if you quarantine everyone who has symptoms and nothing else, then you will be quarantining only some of the suspects. There will always be the asymptomatic people who will still be spreading the disease. You don’t know who they are and it’s not possible to test the entire population,” he said.

“You need to have a way of focusing as this asymptomatic person travels over various distances, over time. We need to find out who all were close to that person and warn the others after the person is identified as positive. This is what Aarogya Setu also does. It will find the symptomatic person and also identify all the asymptomatic people around them in the past few days and advise them too,” said Dr VijayRaghavan.

All future interactions from device to server are done through encrypted device identification detail and no personal information is exchanged after the one-time registration.

When a user comes in proximity of another registered mobile, the app stores an encrypted signature of this interaction on both phones. This information is not pushed on to the server unless the user is a suspect case and considered at risk, either from having come in contact with someone who was later diagnosed as a Covid-19 case, or if the user’s self-assessment categorises him or her at risk of infection.

Kumar insisted that the personal and location data is only used for providing the Covid-19-related information and medical services necessary to stop further spread of the infection.

“Protecting personal information is a priority and the app never reveals the personal identity of anyone, including the identity of the Covid-19 patients. Your data is not going to be used for any other purpose. All security and vulnerability aspects were reviewed by teams from IIT-Madras and a global tech-audit firm,” said Kumar.

The information of all unique interactions is stored only for 30 days on the device, after which all data is deleted. The data for non-risk users is deleted from the server in 45 days, and for at-risk patients, it is wiped in 60 days.

If a user tests positive for Covid-19, the location data is used only to map the places he or she visited over the past 14 days to identify potential hotspots where infection outbreaks are likely to occur and quickly sanitise them and ramp up contact-tracing and testing.

China used QR codes and GPS from mobiles and the social network app Baidu to track movement, while Korea have used security camera footage, credit card records, and GPS data from cars and cellphones for contact tracing. Israel has tracked mobile phones of confirmed or suspected cases, while Austria and Belgium are using anonymised data from telecom operators for contact-tracing and monitoring those quarantined.

The mobile app is designed for scalability and has the architecture to support e-pass, suraksha stores and telemedicine. “It’s a building block model for a holistic health stack that can integrate all health data and healthcare delivery services in one app,” said Kumar.

The Aarogya Setu app is available for both Android and iOS users, and will be available on KaiOS soon.