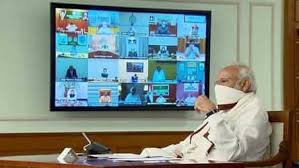 The first hint that Prime Minister Narendra Modi favoured early resumption of economic activity in the country had come a few days before his address to the nation. He had, while speaking with chief ministers over the weekend, told them that it is imperative to focus on lives and livelihoods for India’s bright future, a clear shift from his assertion three weeks earlier that health is wealth.

In line with this sentiment, he extended the national lockdown till 3 May but provisioned for easing restrictions in areas that do not have Covid-19 cases from 20 April. These areas are being classified as green zones and would be the first to see resumption of economic activity.

The 6-day gap, a top government official said, was designed to ensure that everyone is able to understand how to take the first steps out of the lockdown and prepare well for it. “Right from businesses and state governments to the district administration,” the official told Hindustan Times.

It gives everyone time to smooth off the rough edges in the plan, a second senior official, who heads one of the empowered committees on Covid-19 at the Centre, explained.

Besides, it is easier to get people to stay indoors than to ensure that only some of them step out.

Still there had been communication gaps, evidenced by the repeated instructions sent out by the Centre that asked police not to stop truckers from ferrying essential and non-essential goods.

A plan where some people and industrial units outside containment zones could operate requires a more nuanced approach by the district administration, the second official said.

It also gives private companies permitted to operate in the green zones to make logistical arrangements for resuming operations; workforce, raw materials etc. Or to seek clarifications from the government. Like the transporters who have asked the government to explain if their vehicles could pass through districts which have Covid-19 clusters or large outbreaks.

“We also hope that the district administrations would also use this time to reinforce the message that communities in neighbourhoods that have had Covid-19 cases should play a greater role to enforce the lockdown in those areas,” a third official said.

Because the only way the lockdown is going to be lifted is if there are no cases. This is the incentive for community participation that PM Modi had also alluded to in his address to the nation.

That the lockdown could be back if there is a Covid-19 outbreak in a Covid-free zone. “We must make sure we don’t become careless, nor allow anyone else to be careless,” PM Modi had said.

That it was in their interest to stay on the right side of the zoning plan, in which every area would be marked green, orange or red.

The top health ministry official identified 170 districts as Covid-19 hotspots and explained that such areas would be treated as green zones only if they do not report a single coronavirus case in 28 days.