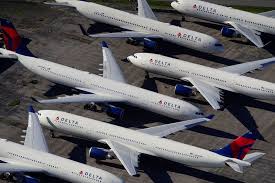 Mark Zessin specializes in making sure luggage gets where it needs to go. When the coronavirus hit, he turned that talent into helping to feed those left unemployed in Houston.

Zessin led an effort to turn part of United Airlines’ cargo facility at George Bush Intercontinental Airport into a production line to create food boxes to help feed families left broke by the COVID-19 crisis. Pallets of canned meats, produce of all kinds – even, on occasion, a little candy for the kids– arrives and the workers divide it all into boxes for distribution by the Houston Food Bank.

“We’re working very effectively with the food bank. You’ve got to feel good about that,” said Zessin, director of baggage handling systems performance for United in Houston. “You wake up every day saying, ‘What I can do to make it better, make it a better world?'”

It all happened because of a local TV news report Zessin saw late last month that mentioned the food bank needed volunteers. He called them. “What do you really need?” he said he asked. The answer wasn’t volunteers to hand out food, but rather an operation that could organize bulk donations into individual portions, enough food to last a family up to a week.

The timing couldn’t have been more perfect. United, like all airlines, is running far below capacity because few people are traveling due to the pandemic. And even though its tempo of operations is low, United is among the airlines able to continue paying its employees even though there is little for them to do because of its share of the federal stimulus.

“This is a great example of the power in working together with our nonprofit partners on addressing their challenges and creating unique solutions to ensure the community is served,”  said Sharon Grant, United’s vice president of Global Community Engagement, in a statement.

Inside the cavernous cargo facility, Zessin set up four assembly lines. Pallets and crates arrive heaped with canned soup, chili or meat and produce like melons, carrots, beets, onions, oranges and more. It all gets packaged into the food bank’s “disaster boxes” or repackaged onto other pallets to be taken to institutional kitchens for feeding the needy.

United employees divide up 22,000 pounds of food a day to be distributed through the food bank. Since April 8, they have boxed up nearly 160,000 pounds of food, and in coming weeks, Zessin said he hopes they can vastly increase the effort. At one event alone last weekend, he said, boxes were delivered to more than 4,000 families.

The head of the food bank said that event wouldn’t have been possible without the United volunteers.

“It’s really helped us,” said Brian Greene, president of Houston Food Bank. “We’re trying to spread out the distribution as much as we can, but almost anywhere we’re seeing long lines.”

He said he appreciated United’s “out-of-the-blue offer” that solved the hardest part of ramping up in the face of a crisis: lining up everything to be handed out.

The process has been made more cumbersome by the limitations of social distancing to prevent the virus’ spread.

United workers on the assembly line – from baggage handlers to flight attendants, pilots and executives – have to space out when filling the boxes of food. They wear masks, gloves and there’s plenty of hand sanitizer available, Zessin said.

They work in two shifts a day, five days week, handling a “potpourri” of donated goods.

He said it is fulfilling work.

“We’re able to make a difference, not just for our customers, but for our community,” Zessin said.