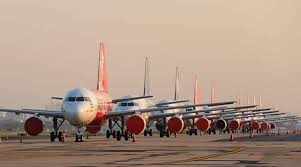 India’s aviation regulator, the Directorate General of Civil Aviation (DGCA) on Friday (July 3) extended the ban on international flights until July 31. The ban was until July 15 so far, and the restarting of normal scheduled international passenger flights has now been deferred further.

So why did the DGCA extend the ban?

According to senior government officials, the ban was extended because it was felt that it would take some more time for India to prepare before it can resume scheduled international operations.

The resumption of international flights depends mainly on the destination country allowing Indian citizens into its borders, or removing travel restrictions that they put in place over the last few months.

India’s coronavirus situation is still far from being under control. As of early evening on Saturday (July 4), India, with 6,48,315 cases, was on the verge of overtaking Russia (6,73,564) as the third worst hit country in the world, according to data on the Johns Hopkins University global coronavirus dashboard. India added over 22,000 new cases on July 3.

Globally, the United States has the largest number of cases (nearly 28 lakh), followed by Brazil (well over 15 lakh). The total number of confirmed cases worldwide is over 1.1 crore so far, and over 5.25 lakh people have died of Covid-19, according to the JHU dashboard.

Have any countries relaxed restrictions for Indians?

As some jurisdictions are opening up their borders for travel, they have left out countries including India, the US, and Brazil, where case numbers continue to rise.

A group of 27 European Union countries agreed on an initial “safe list” of 14 countries earlier this week — travellers from these countries will be allowed to travel for non-essential purposes. This list is set to be reviewed every two weeks.

The government of the United Kingdom has established travel corridors with 59 jurisdictions, from where passengers will be allowed to enter the UK July 10 onward without having to self-isolate, unless they have travelled to a country not mentioned in the list in the 14 days preceding their arrival. The safe list of the UK, which is among the most popular international destinations for Indians, does not include India.

Is India too planning to establish travel corridors?

On Thursday (July 2), Airports Authority of India (AAI) chairman Arvind Singh told reporters that India was in an advanced stage of discussions to establish individual travel bubbles with the US, Canada, and several European countries. The US-based United Airlines had announced flights on the Delhi-Newark route on July 10, July 12, and July 15 to carry passengers from India to the US. The airline has not, however, been permitted to fly passengers from the US to India.