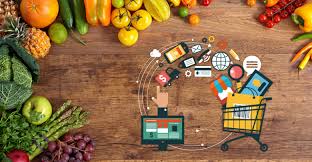 As more customers signed up for online grocery services amid the pandemic, companies in the segment seem to be well on course to log higher sales. Analysts at consulting firm RedSeer estimate the sectoral gross merchandise value (GMV) to touch over $3 billion this year. Although nowhere close to doubling last year’s sales numbers, it nonetheless is considerably higher than $1.9 billion in GMV that firms reported in 2019. To be sure, online grocery formed just 0.5% of the total market as of FY20 and experts reckon there is enough room to grow.

The e-grocery GMV saw a sharp spike in the months of May and June as consumer demand peaked. There was an expected 1.5 to 1.6 times increase in households that subscribed to online grocery in May compared to January, RedSeer said in the report.

Saurabh Kumar, founder at Grofers, said the platform has acquired as much as 18 lakh new customers since the lockdown and the company has managed to retain more than 70% of consumers who bought groceries in the first month of the pandemic. While there has been a 40% increase in basket size as compared to the pre-COVID era, order bookings from smaller cities have increased. Kumar said Grofers witnessed an increase of 54% in orders from places like Indore, Agra and Panipat. Earlier this month, BigBasket had said the number of new customers has increased by as much as 84% compared to the pre-COVID levels while the retention rate grew by 50% against the earlier 30%-45%.

Most analysts believe the COVID-led shift to online groceries is not a temporary behavioural trend. Bulk of consumers will retain their subscriptions to e-grocers. Basis this assumption, RedSeer estimates the size (in terms of GMV) of the e-grocery market to jump manifold to $18.2 billion by 2024 from $1.9 billion in 2019. Also, entry of big players into the space like Jio that have an expansive pan-India distribution network means a potentially vast market spanning tier two cities and beyond is waiting to be tapped. JioMart is capitalising on the company’s 11,806 outlets across 7,000 strong chain of retail stores across 7,000 towns in the country and partnering with kiranas to shore up its customer base. The firm claims to be already servicing over 400,000 orders on a single day.

Earlier this year, JioMart partnered with Facebook-owned WhatsApp that has a user base of more than 400 million in India, giving the company the much needed lever to deepen its network of kirana stores and consumer reach. “With its latest fundraise from strategic partners like Facebook, its own physical assets pan-India and acquisition of Future Retail, Jio’s intentions to expand and capture the eGrocery space is clear,” analysts at RedSeer said in the report.

In fact, Abhijit Routray, senior consultant at RedSeer, told FE that partnership with kiranas is likely to emerge as a growing business model in the smaller cities.

Satish Meena, senior analyst at Forrester Research, said a significant proportion of the 150 million online buyers have started spending on e-groceries during the pandemic. As far as the players are concerned, BigBasket has a considerable hold on the high-income households while Grofers has been able to tap into mid-income households that typically earn below Rs 15 lakh annually. Grofers’ private labels have worked. JioMart’s kirana-led model, however, is not the easiest to build and it needs to be seen how the company scales it up. Few players that initially started with a kirana-based model eventually pivoted, Meena said.

However, JioMart will be able to bring the Reliance Retail customers online due to offerings like discounts and cashbacks, Meena said. “Mass adoption of online grocery will take some time. It is important to note that a lot of people moved to home towns from workplaces which is leading to increased orders from small towns. We have to see if the trend continues,” Meena added.

E-grocery has grown 73% in the period of lockdown. Most notably, fresh vegetables and fruits have seen 144% growth, while FMCG products grew 150%, the report said.