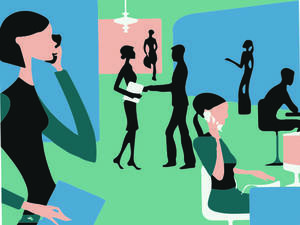 According to Microsoft’s latest Work Trend Index, that surveyed over 6,000 information and first-line workers across eight countries globally, India had the second highest percentage of workers facing increased burnout in Asia at 29 per cent.

Employees in India are facing increased burnout due to lack of separation between work and personal life as well as concerns of contracting COVID-19, a report said on Wednesday.

According to Microsoft’s latest Work Trend Index, that surveyed over 6,000 information and first-line workers across eight countries globally, India had the second highest percentage of workers facing increased burnout in Asia at 29 per cent.

Moreover, India came out top with over 41 per cent of workers citing the lack of separation between work and personal life as negatively impacting their wellbeing, resulting in increased stress levels, the report said.

“In the last six months, we have seen how COVID-19 has created an era of remote anywhere. It has led to the evolution of a new workplace from a physical space to one residing in a virtual world,” said Samik Roy, Country Head, Modern Work, Microsoft India.

Roy further noted that “as businesses adapt to a new way of working, it is important to examine the multifaceted impact that the new working conditions are having on employees. This is helping us provide relevant and timely solutions to all our customers and users”.

Data showed that, globally, even six months past the first work-from-home orders, people are in significantly more meetings, taking more ad hoc calls and managing more incoming chats than they did before the pandemic. “As people adjusted to remote working, after hours chats, or chats between 5 pm and midnight, have also increased,” the report said.

Further, for remote workers in Asia, no commute is hurting and not helping productivity, the report said adding that for years, Microsoft’s research group has been studying how commute has helped maintain work-life boundaries and worker’s productivity and wellbeing.

Microsoft said a series of updates have been launched within Microsoft Teams to support employee wellbeing. These include a virtual commute experience that helps users prepare for the day and mindfully disconnect in the evening.

Microsoft has also partnered with Headspace to bring a curated set of mindfulness and meditation experiences into the Teams platform and launched new Teams experiences for first-line workers to support them with the tools they need to work more safely.

This Work Trend Index report looks at how the pandemic has impacted wellbeing at work globally. It studied how productivity patterns in Microsoft Teams have shifted since early this year and surveyed over 6,000 information and first-line workers in eight countries including Australia, Brazil, Germany, Japan, India, Singapore, the UK, and the US.