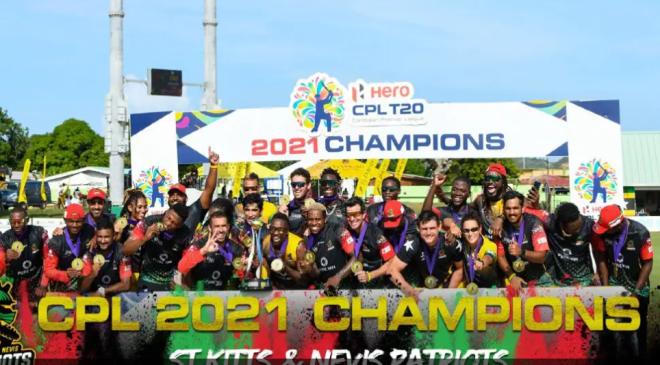 West Indian legend Chris Gayle had another T20 title under his belt when his latest team – St Kitts and Nevis Patriot – won their maiden Caribbean Premier League (CPL) 2021 title in an exciting last-ball climax against St. Lucia Kings at Basseterre on Wednesday (September 15). Young Dominic Drakes remained unbeaten on 24-ball 48 and managed a single off the final ball of the innings to ensure a three-wicket win for Dwayne Bravo’s side.

Gayle along with rest of the players like Bravo, Imran Tahir, Faf du Plessis, Evin Lewis, Sherfane Rutherford and Tim David will now fly to the UAE for the resumption of Indian Premier League (IPL) 2021 from Sunday (September 19).

Batting first, St. Lucia Kings posted 159/7 with all-rounders Rahkeem Cornwall and Roston Chase top-scoring with 43 each. Keemo Paul provided the fireworks at the end of the innings, smashing 39 off 21 balls with five sixes.

For the Patriots, Fawad Ahmed (2/32) and young Pakistan paceman Naseem Shah (2/26) were the pick of the bowlers.

Chasing 160 to win, the Patriots were off to worst possible start with Gayle dismissed by Chase for a duck. Wicketkeeper Joshua da Silva (37) and Rutherford (25) steadied the innings with a 45-run stand for the third wicket.

Drakes hammered an unbeaten 48 off 24 balls, his highest score in T20 cricket as St Lucia Kings succumbed to a defeat, their second in a row in a CPL final.