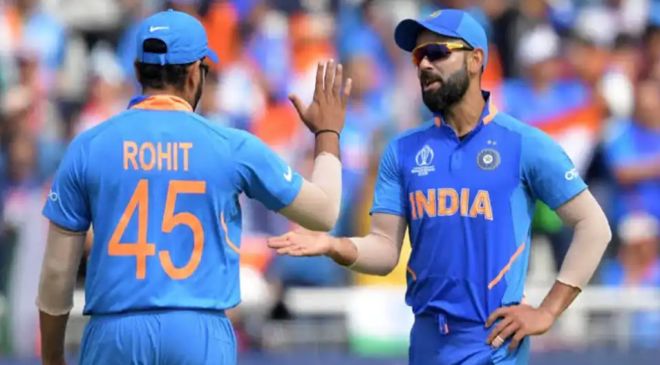 Team India skipper Virat Kohli made the shock announcement of quitting T20 captaincy on Thursday (September 16) through his social media pages. That isn’t the end of the story though as Kohli’s position as captain in the ODI format is also far from being secure. India’s failure to win an ICC trophy under Kohli is one of the biggest reasons for Board of Control for Cricket in India’s (BCCI) concerns, who have brought in former captain MS Dhoni as Team Mentor to bolster the team’s chances at the T20 World Cup 2021.

However, news agency PTI revealed that all is not right between Kohli and his deputy Rohit Sharma as well. Kohli, in fact, went to the Indian selectors and wanted Rohit relieved of ODI vice-captaincy to be replaced by KL Rahul since he considered the Mumbai Indians skipper too ‘old’ at 34.

Kohli wanted the ODI vice-captaincy to be handed to K L Rahul with Rishabh Pant performing the role in the T20 format, the PTI reported.

“This didn’t go down well with the Board which believes that Kohli doesn’t want an actual successor,” a Board source said. In the BCCI corridors, officials have figured that Kohli wants to safeguard his 50-over captaincy till the 2023 World Cup.

However, it is reliably learnt that it might not happen as in the past few months, Kohli has managed to alienate more people – the players, the support staff, the national selectors and last but not the least the board mandarins.

Will Kohli step down as Royal Challengers Bangalore captain too?

Soon after Kohli made a sensational announcement of quitting Team India T20 captaincy, another chorus started doing the round that the 32-year-old should step down from the Royal Challengers Bangalore leadership role, too, as the ‘work-load’ in the Indian Premier League is ‘no less’ than any international event.

It is learnt that Kohli might quit RCB captaincy if the team fails to win the title even this time. A former BCCI official told IANS: “What kind of announcement was that from Virat? Do you understand…Work-load problem solved?

“I read somewhere that post-pandemic break since December 2020, India have played just eight T20s. IPL k matches jyada khel liye honge I guess (Must have played more IPL matches since then). Captaincy in the IPL is no easy thing. I mean look at the intensity of each tournament. It is crazy. The demand of winning (from franchises) is beyond explanation.

“So, will Kohli step down as the RCB captain? By still leading in all the three formats (Test, ODI and RCB in IPL), the work-load question is still not resolved,” added the former official.

Even a cricket commentator and expert had written on Twitter that he ‘had thought Virat would give up the captaincy of RCB’.

For all his stunning success as a batsman, Virat can never claim to have mastered the art of captaincy in white-ball cricket, especially in T20s. His decision to step down as T20 captain though has the hallmark of a perfectly timed cover drive.

Kohli’s record as RCB captain is poor. Having taken over the RCB captaincy full-time in 2013, he hasnt been able to deliver a single title and took them to just one final.

Last season, RCB qualified for the play-offs for the first time since 2016, but they suffered five straight defeats at the end. In 2019 and 2017, RCB finished at the bottom of the table; they were sixth in 2018.

After the 973-run blockbuster season in 2016, he has aggregated 500-plus runs just once, in 2018. In the ongoing edition, he averages 33 with one half-century after seven games.