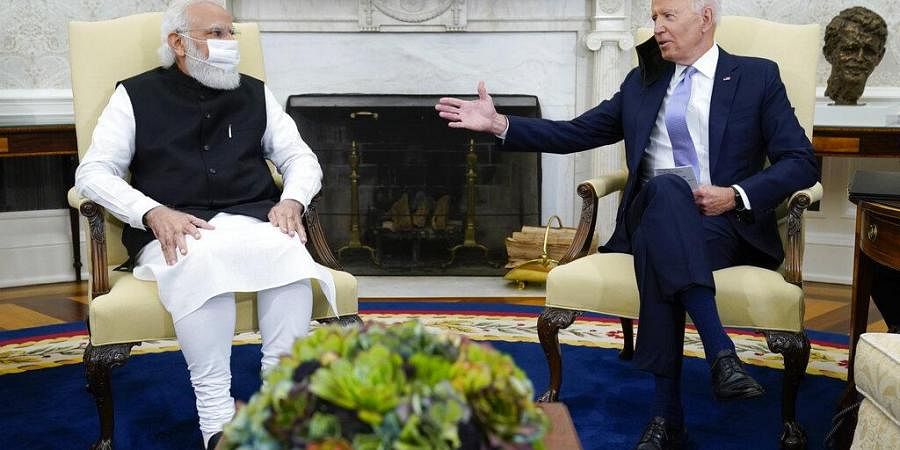 During their first bilateral meeting at the Oval Office of the White House, both PM Narendra Modi and President Joe Biden discussed a wide range of priority issues, including combating COVID-19, climate change, economic cooperation as well as Afghanistan.

Washington: Prime Minister Narendra Modi met Joe Biden at the White House on Friday in his first bilateral meeting with the US President during which the two leaders discussed a wide range of priority issues, including combating COVID-19, climate change, economic cooperation as well as Afghanistan.

Welcoming PM Modi at the White House, US President Joe Biden said, “I have known you for a long time. I am glad that you have come back to the White House. You are well aware of our history. Our relationship has always been good.” In his introductory remark, President Biden also told PM Modi that ”four million Indian Americans are making America stronger every day.”

The US President told PM Modi, “Today we begin a new chapter in Indo-US relationships.” President Biden continued to say, ” ‘ve long believed that the US-India relationship can help us solve a lot of global challenges. In fact, back in 2006, I had said that by 2020 India & the US will be among the closest nations in the world.”

On his behalf, PM Modi thanked the @POTUS for the warm welcome. “I recall our interactions in 2014 and 2016. That time you had shared your vision for ties between India and the USA. I am glad to see you are working to realise this vision,” the PM said.

The Prime Minister further said the trade will continue to play a major role between the countries. “In 2014 and 2016, I got an opportunity to talk to you. You had shared your vision for the Indo-US relations,” PM Modi said. PM Modi further told President Biden, “Mahatma Gandhi always used to say about trusteeship of the Planet. This sentiment of trusteeship is the need of the hour globally.”

“Seeds that we will be sowing in the first year of the 3rd decade of the 21st century will help grow the Indo-US ties. It will also prove transformative for democracies around the world,” PM Modi said after meeting President Biden at the White House. Focussing on technology, the PM said, “Technology is becoming a driving force. We have to utilise our talents to leverage technology for the greater global good,”

While the two leaders have met earlier when Biden was the Vice President of the country, this is for the first time that Biden met PM Modi days after he became the 46th president of the US in January.

Both Biden and Prime Minister Modi have spoken over the phone multiple times and have attended a few virtual summits, including that of the Quad in March hosted by the US president. The last telephone conversation between them took place on April 26.

“This morning I’m hosting Indian Prime Minister Narendra Modi at the White House for a bilateral meeting. I look forward to strengthening the deep ties between our two nations, working to uphold a free and open Indo-Pacific, and tackling everything from COVID-19 to climate change,” President Biden tweeted just minutes ahead of the meeting.

PM Modi, who is visiting the US for the 7th time after assuming office in 2014, had said his visit would be an occasion to strengthen the Indo-US Comprehensive Global Strategic Partnership and exchange views on regional and global issues of mutual interest with President Biden. Among the issues also include discussion about new areas of cooperation, said a senior administration official on the eve of the India-US bilateral summit.

“The bilateral meeting (between PM Modi and Prez Biden) will also feature the current regional security situation following recent developments in Afghanistan, our stakes as a neighbour and a longstanding and a preferred development partner of Afghanistan,” he had said in New Delhi on Tuesday.

“In this context, we would undoubtedly discuss the need to stem radicalism, extremism, cross-border terrorism and the dismantling of global terrorist networks,” Shringla added. After the Taliban’s takeover of Afghanistan in mid-August, India has been saying that its focus was to ensure that the war-torn country’s soil is not used for terrorist activities against it.

Shringla said the importance of smooth post-COVID travel, especially for students, is also an important factor and is expected to be discussed at the talks.

Following the bilateral summit, Prez Biden in the afternoon would welcome PM Modi again at the White House for the first-ever in-person Quad Summit. Prime Minister Scott Morrison of Australia and Prime Minister Yoshihide Suga of Japan will also attend the summit.

The Summit provides an opportunity to take stock of the outcomes of the Quad leaders’ Virtual Summit in March this year and identify priorities for future engagements based on our shared vision for the Indo-Pacific region, the administration official said.

India, the US and several other world powers have been talking about the need to ensure a free, open and thriving Indo-Pacific in the backdrop of China’s rising military manoeuvring in the region.