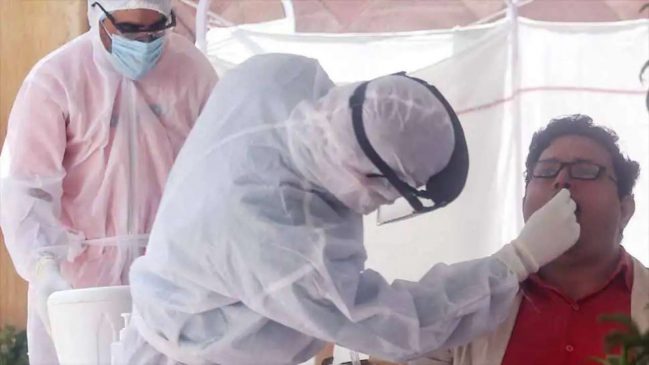 RT-PCR tests can only confirm whether the person has an infection or not. They are not designed to determine which particular variant has infected the person. For that, a genome sequencing study has to be done.

The Omicron variant of SARS-CoV2 is being seen as a big threat, with the World Health Organization (WHO) Sunday assessing the global risk as “very high”. Preliminary data has indicated that Omicron could have higher transmissibility, and also a greater ability to evade the immune response generated either through prior infection or through vaccines.

Timely detection of this variant is, therefore, key to containing its spread. The WHO has said one positive thing about this variant is that it could be detected in some of the RT-PCR diagnostic tests being used across the world, unlike other variants whose presence can be determined only after genetic sequencing. This can speed up detection and help in controlling the spread.

But as scientists told The Indian Express, this is not straightforward; most RT-PCR tests in India might not be able to distinguish between Omicron and other variants.

Omicron variant: How a ‘miss’ by RT-PCR helps

RT-PCR tests can only confirm whether the person has an infection or not. They are not designed to determine which particular variant has infected the person. For that, a genome sequencing study has to be done.

Not all infected samples are sent for genome sequencing, because it is a slow, complicated and costly process. Normally, only a very small subset of all positive samples — about 2 to 5 per cent — is sent for gene analysis.

RT-PCR tests look for the presence of some specific identifiers in the genetic material (not the entire gene sequence) of the virus in the human body. Usually, two or more identifiers are searched to increase the probability of finding a match. If one of the identifiers has mutated, the other one can still return a positive result.

Many of the RT-PCR tests look for an identifier in the coronavirus spike protein, the protruded area that allows the virus to enter the human body. If there are mutations in the spike protein, as is the case with the Omicron variant, then there is a possibility that such RT-PCR tests, looking for identifiers in this region, would not recognise the mutation as the identifier it is looking for, and would thus give a negative result.

The problem is that Omicron is not the only variant that has mutations in the spike protein. A few others, notably the Alpha variant, also have mutations in this region, and therefore could show similar behaviour in RT-PCR tests.

Nonetheless, such a result can be seen as a screening mechanism for the Omicron variant, especially since the prevalence of the Alpha variant in the Indian population has gone down significantly. Such screening at the diagnostic test stage can be vital in identifying and isolating the potential infections with the Omicron variant.

As Anurag Agarwal, director of Delhi based Institute of Genomics and Integrative Biology (IGIB) explained, such a result would only be indicative of the presence of Omicron variant, and would need to be confirmed through gene sequencing. But it is still an important head start.

The WHO said one of the widely-used RT-PCR kits, developed by Thermo Fisher Scientific, can detect the presence of Omicron variant. Some of the kits being used in India can also potentially detect the variant. As Vinod Scaria, a scientist at IGIB, said, the ability of kit to detect the variant depended on the primers (chemicals that will pick up the identifiers) being used.

“Unfortunately, the primer details for a majority of kits used in India are not publicly available. So, one cannot say whether a particular kit being used will be able to detect this variant or not,” Scaria said.

If the diagnostic tests do not offer any indication, the detection of Omicron, or any other variant, would have to await the result of gene sequencing exercise that takes anywhere between 24 and 96 hours, depending on the technology being used. But since all samples are not sent for sequencing, it is possible that the Omicron variant will have started circulating but not been picked up. One way to counter this is by increasing the number of samples sent for sequencing.

R R Gangakhedkar, former head of epidemiology at ICMR, said a smart strategy needed to be worked out since it was not possible to send all samples for gene sequencing. He said that in India, it was still the Delta variant that was most prevalent and, therefore, wherever applicable, the diagnostic test laboratories should look out for the missing identifier in the spike protein region, and immediately mark these for gene sequencing.