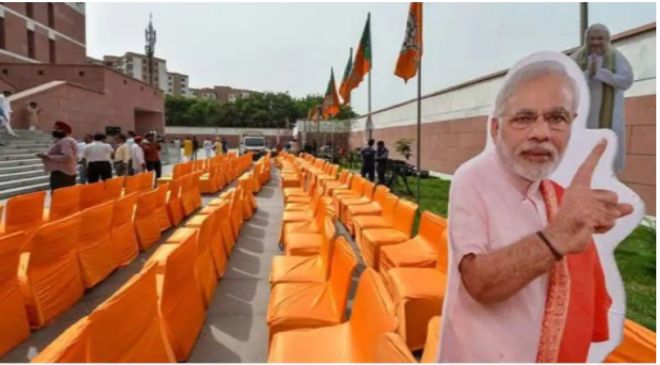 It is to be noted that yesterday (January 11), a meeting of the Bharatiya Janata Party’s Core Committee on the Uttar Pradesh Assembly polls was held at the party office.

New Delhi: As many as 50 staff members tested positive for COVID-19 at the Bharatiya Janata Party headquarters in the national capital on Wednesday.  “Around 50 people have been found positive for COVID-19 at the BJP headquarters including staff, BVG staff (engaged in cleaning and serving), security staff and media co-head in-charge Sanjay Mayukh as per the testing done on Tuesday. All are in isolation and are adhering to COVID-19 protocols,” sources told news agency ANI.

“Sanitization has been carried out at the office. Moreover, COVID-19 tests are being conducted on a regular basis,” sources said.” Only people engaged in important activities related to the office are coming to the headquarters,” the sources added.

It is to be noted that yesterday (January 11), a meeting of the Bharatiya Janata Party’s Core Committee on the Uttar Pradesh Assembly polls was held at the party office. The second round of the meeting will be held today.

On Monday, the President of the Bharatiya Janata Party Jagat Prakash Nadda said he had tested positive for the COVID-19 infection.”I got my COVID-19 test done after witnessing initial symptoms. My report has come positive. I am feeling fine now. On the advice of doctors, I have isolated myself. All those who have come in contact with me in the last few days are requested to get themselves tested,” tweeted Nadda in Hindi.

The Omicron tally in the country, meanwhile, reached 4,868. Maharashtra has the highest number of cases (1,281) of the new variant, followed by Rajasthan (645). While Delhi has the third highest tally at 546, the national capital recorded no new cases of the variant in the last 24 hours.