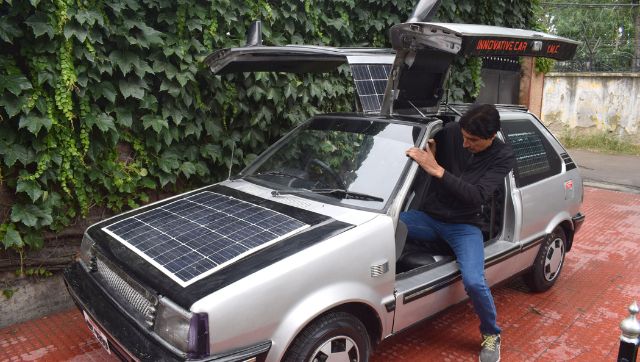 With fuel prices soaring through the roof, people have been looking for alternatives for their mode of transportation. Now, a man from Kashmir is going viral for his creative solution – a car powered by solar energy.

Bilal Ahmed, a maths teacher from Srinagar, has been earning plaudits online after photos of a sedan with doors opening like luxury cars went viral. Images shared online show panels on almost all available surfaces of the car, from the bonnet to the rear windshield.

The car left many intrigued online, particularly electric car enthusiasts who have been wishing that Elon Musk launches Tesla’s operation in India. Mixing innovation with style, Ahmed who worked on the project for more than a decade wants to make it an affordable version for common people.

“Cars like Mercedes, Ferrari, BMW are just a dream for a common person. Only few people are able to afford it while it remains a dream for others to drive such cars and roam in it. I thought of something to give a luxurious feel to the people,” he told Rising Kashmir.

While initially, he planned to make a vehicle accessible to people with disabilities, his plans did materialise owing to a lack of funds. However, amid the growing concern about fuel price hikes, he evolved his plans to turn it into a car that runs on solar power.

Now, after 11 years of hard work and research, he finally achieved his dream. Talking to Daily Excelsior, Ahmed said that he used monocrystalline solar panels, which are known to generate maximum energy even with less solar energy, for his vehicle. He explained that these are more efficient and occupy a low surface area.

And while most sports cars have a seating capacity of just two, keeping cost-effectiveness at its core, he modelled his vehicle to accommodate up to four people.

The man said that so far, he has spent a total of over Rs 15 lakh making the fully-automatic car, without any financial assistance from any sector.

“When I began the project and even after I completed it, no one provided me with any financial assistance; if I would have got the necessary support, perhaps I would have been India’s Elon Musk,” he said.

Ahmed is now earning heaps of praise, not just from netizens but also from politicians.

His hope now is to get some form of financial support to start a company that can start manufacturing this car, which in turn will also generate youth employment in the Valley.