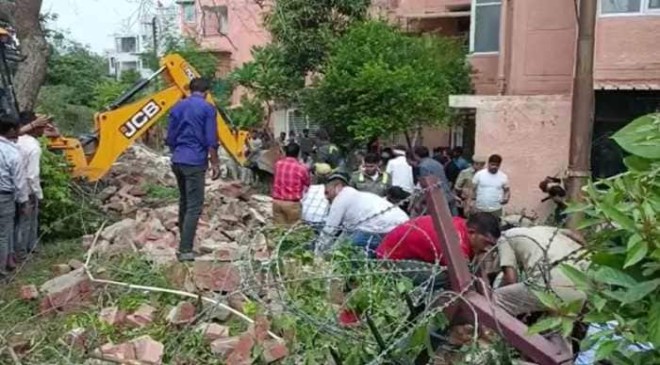 Noida wall collapse: At the moment, authorities are trying to clear the debris with the help of a JCB machine and rescue potential victims.

New Delhi: The boundary wall of Jal Vayu Vihar society in Sector 21, Noida collapsed on Tuesday morning as per reports. A few people are feared to be buried under the debris from the collapse. Drainage repair work that was ongoing near Jal Vayu Vihar in Sec 21 is suspected to be the cause behind the wall collapse, informed Noida DM Suhas LY.

As per an ANI report, labourers were pulling out bricks which led to the wall collapse. Noida DM further said there were reports of 4 deaths as well from Dist Hospital & Kailash Hospital which need to be verified.

Speaking to ANI about the current situation, he said, “Rescue operation is underway. Details of the injured people are being ascertained. The area is being searched as a precautionary measure. All teams are present here.”

The wall which fell was located near the police station in Sector 20 area. At the moment, authorities are trying to clear the debris with the help of a JCB machine.

To aid in clearance and search operations for potentially injured people, the fire brigade department is also present at the spot.

(This is a developing story)