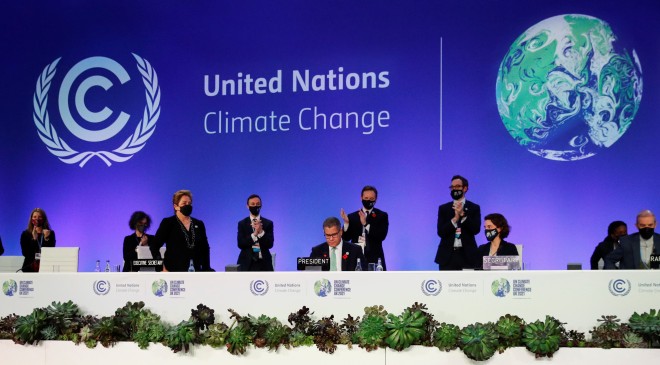 The Egyptian presidency’s international meeting had gone into extended extra time, and it threatened to be overshadowed by the start of the World Cup, to which the United Nations Secretary-General had already fled.

Egypt: A last-minute fight over emissions-cutting and the overall climate change goal keeps delaying a potentially historic deal that would create a fund for compensating poor nations that are victims of extreme weather worsened by rich countries’ carbon pollution. Final discussions were put off for several hours late Saturday and into the wee hours of Sunday morning. Delegates, activists and others tried to grab catnaps on couches and chairs as negotiators kept looking for solutions. Promised documents outlining potential agreements kept being more wishes than reality. Bleary-eyed rumpled delegations began to fill the plenary room at 4 am local time Sunday but so far few if any of them had seen the key document they were scheduled to soon decide upon.

The international meeting run by the Egyptian presidency amid a lot of criticism had gone into extended extra time and threatened to be overshadowed by the beginning of the World Cup, which the United Nations Secretary-General had already fled to. Going into the final session, battle lines were drawn over India’s request to change last year’s agreement that called for a phase-down of “unabated coal” to include a phase-down of oil and natural gas, two other fossil fuels that produce heat-trapping gases. While European nations and others keep pushing for that language, Saudi Arabia, Russia and Nigeria have been insistent on keeping it out.

“We are extremely on overtime. There were some good spirits earlier today. I think more people are more frustrated about the lack of progress,” Norwegian climate change minister Espen Barth Eide told The Associated Press. He said it came down to getting tougher on fossil fuel emissions and retaining the goal of limiting warming to 1.5 degrees Celsius since pre-industrial times as was agreed in last year’s climate summit in Glasgow.

“Some of us are trying to say that we actually have to keep global warming under 1.5 degrees and that requires some action. We have to reduce our use of fossil fuels, for instance,” Eide said. “But there’s a very strong fossil fuel lobby … Trying to block any language that we produce. So that’s quite clear.” Several cabinet ministers from across the globe told the AP Saturday that an agreement was reached on a fund for what negotiators call loss and damage. It would be a big win for poorer nations which have long called for cash. sometimes viewed as reparations. because they are often the victims of climate disasters despite having contributed little to the pollution that heats up the globe.

The loss and damage deal was a high point on Saturday. “This is how a 30-year-old journey of ours has finally, we hope, found fruition today,” said Pakistan Climate Minister Sherry Rehman, who often took the lead for the world’s poorest nations. One-third of her nation was submerged this summer by a devastating flood and she and other officials used the motto: “What went on in Pakistan will not stay in Pakistan.”