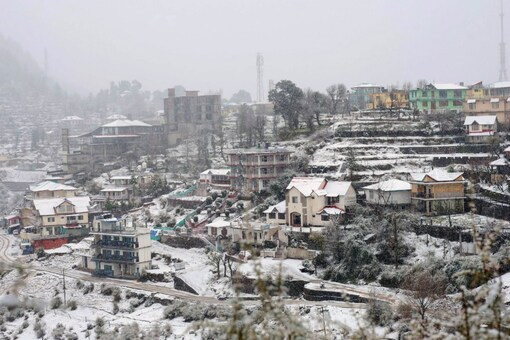 There was a slight improvement in the AQI of Mumbai that was in the ‘very poor’ category for four straight days. Most areas in Mumbai reported AQI below 200 or ‘Poor’ air quality. Some areas like Sion and Deonar saw AQI cross the 200 mark.

Relief from the biting cold in the national capital that recorded the highest January minimum temperature of 10.6 degrees Celsius, three notches above normal, according to the the India Meteorological Department (IMD).

According to PTI, the maximum temperature in Delhi was recorded at 23.1 degrees Celsius, three notches above normal. According to IMD, light to moderate rainfall is expected in the city next week. Strong surface winds are likely to prevail over Punjab, Haryana, Delhi and west Uttar Pradesh on January 23 and 24, they said.

The IMD also said north India will get a respite from the cold wave for the next five days.

Meanwhile in parts of Himachal Pradesh, including Jakho peak in Shimla and adjoining areas of Kufri, received fresh snowfall on Friday, leading to a marginal increase in tourist footfall in the state capital, officials told PTI.

The higher reaches of Himachal Pradesh witnessed light to moderate snowfall while intermittent rains occurred across the state under the influence of western disturbances, leading to the closure of 380 roads, they said.

As many as 182 roads were closed for vehicular traffic in Lahaul and Spiti, 68 in Shimla, 53 in Kullu, 29 in both Mandi and Kinnaur, 14 in Chamba, three in Sirmaur and two in Kangra districts.

The local meteorological office has predicted a wet spell in the region till January 26 with light rain and snow at isolated places on January 21 and 22 and light to moderate snow at many places in mid and high hills on January 23.

Snowfall and rain were also reported in various parts of Uttarakhand on Friday intensifying the cold, adding to the woes of people from land subsidence-hit Joshimath living in temporary relief camps.

Chief Minister Pushkar Singh Dhami held a meeting with senior officials including Additional Chief Secretary Radha Raturi and Secretary Disaster Management Ranjit Kumar Sinha and asked them to ensure that enough heaters and bonfire material are supplied to the temporary relief centres in Joshimath, per PTI.

Apart from Joshimath, located at a height of around 6,000 feet, many famous locations in the higher altitudes of Chamoli and Rudraprayag districts, including Badrinath, skiing destination Auli, Kedarnath, Hemkund Sahib, Nanda Devi National Park and the Valley of Flowers also witnessed snowfall, officials told PTI.

There was a slight improvement in the AQI of Mumbai that was in the ‘very poor’ category for four straight days. Most areas in Mumbai reported AQI below 200 or ‘Poor’ air quality. Some areas like Sion and Deonar saw AQI cross the 200 mark.

According to a Hindustan Times report, the Maharashtra Pollution Control Board (MPCB) has sought to relocate nine of the System of Air Quality Research and Forecasting (SAFAR) monitoring stations to ‘cleaner’ areas of the city following criticism over poor AQI in the city.