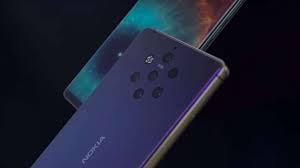 Nokia 9 PureView has now leaked through a press render. The render shows a metal frame as well as Android One branding on the Nokia 9. The new smartphone, which is speculated as the first Nokia smartphone with a penta-lens camera setup, was initially rumoured to arrive this year. However, Nokia brand licensee HMD Global was recently reported to have delayed the Nokia 9 launch due to some production line issues for the cameras. The handset also recently tipped to debut sometime in the last week of January 2019. Apart from sporting the penta-lens camera arrangement, the Nokia 9 PureView is expected to have an in-display fingerprint sensor.

Tipster Evan Blass, who is popular for revealing unannounced developments through his Twitter account @evleaks, on Sunday leaked the press render of the Nokia 9 PureView. The render shows the new Nokia model with a thin-bezel, flat display panel that doesn’t have any curved edges – unlike any of the recent Samsung flagships. The frontal panel of the Nokia 9 also doesn’t have any display notch. Further, there is apparently a metal frame, with glass panels covering the front and back sides.

The leaked render of the Nokia 9 also highlights its penta-lens camera setup that is speculated to sport five Zeiss-branded camera sensors in a circular form, along with an LED flash and a proximity-detecting dual sensor. Some past rumours have also claimed that the Nokia 9 will come with a 6-inch display as well as have 8GB of RAM and 256GB of onboard storage.

Alongside giving a clear look of the penta-lens camera, the leaked press render suggests an in-display fingerprint sensor on the Nokia 9 PureView. The smartphone also appears to have Android Onebranding at the back. This means we can safely presume the availability of stock Android 9.0 Pie out-of-the-box and upgradability to Android Q.

Blass emphasises that the Nokia 9 PureView is currently under development with codename “Beholder”. Initially, the smartphone was rumoured with the codename “Olympic”.

A report earlier this month claimed that HMD Global delayed the launch of the Nokia 9 due to production line issues, especially with the complex penta-lens camera setup. Nevertheless, the smartphone could be in plans to arrive in the last week of January 2019. A render surfaced last week showed “one month” alongside the concept image of the Nokia 9. That hinted at its arrival next month.