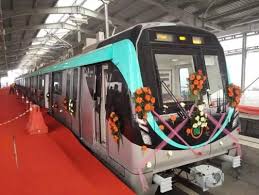 At 29.7 kilometres, this line will be the longest Metro corridor in the country to be inaugurated at one go. At 29km, officials said, the Hyderabad Metro held the earlier record.

Adityanath is scheduled to arrive in Noida’s Sector 84 in a helicopter from where he will proceed to open the line from Sector 137 station. From there, he will take a Metro ride to the terminal station in Greater Noida.

“There are several other specialties to this line. We are generating solar energy, have women drivers, and there are free water and toilet facilities for people,” PD Upadhyay, executive director, Noida Metro Rail Corporation (NMRC), said.

Work on the Aqua Line started in May 2015 and was completed in a record time of three-and-a-half years. It has been constructed at a cost of Rs 5,503 crore.

Mass public transport has been mostly unavailable in both cities, except for a handful of buses, and informal services such as autos have also been few and far between, especially in Greater Noida.