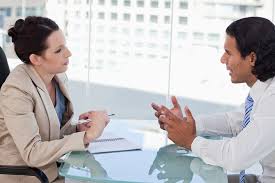 A job interview is as much of an opportunity for the interviewer as it is for the candidate. It should be an open, informative process for both parties. If the interviewer is giving you the runaround instead of actually answering any of your questions, that’s a sign of bigger problems. What red flags should you look out for during a job interview?

The hiring manager is distracted.

The hiring manager should dedicate their full attention to your interview. If they’re checking email, answering the phone, or people come in and interrupt the interview, these are signs of disorganization within the company. It can also be indicative of a negative company culture. If they’re truly so busy that they can’t stop multi-tasking long enough to conduct one interview, there’s a reason behind it.

The communication is terrible.

If you feel like your calls or emails are going unanswered, or it takes the hiring manager ages to get back to you, that’s never a good sign. Poor communication can signal much bigger issues such as disorganization in the company or overworked employees. It’s not uncommon to correspond with multiple people throughout an interview process, but if you find yourself answering the same questions more than three times, that can be another sign of disorganization. Also be wary of correspondence that’s unprofessional and asks questions that are irrelevant to the job.

No job application will list every single job responsibility, but if you find your interviewer listing a lot of responsibilities that weren’t mentioned in the job posting, be cautious. The interviewer should be able to provide you with a clear picture of what you’ll be expected to do and give you an overview of your day to day responsibilities. There’s no reason for ambiguity when describing a position unless there’s something they don’t want to disclose. It’s often a sign that you’ll be asked and expected to do additional work that falls outside of the job responsibilities.

The length of the interview process is dictated by the level of the position. Interviews for entry level positions are shorter and less intensive than senior level positions, which usually require a round of interviews with multiple people. There are exceptions to this, of course, but they’re usually stated. If it’s an urgent position to fill, interviews will be fast-tracked, but that will be disclosed. The same goes for a longer than usual process.

You’re pressured to make a decision at the end of the interview.

It’s not uncommon for a hiring manager to ask a question at the end of an interview to gauge the candidate’s interest. Usually this is a fairly vague question, and they rely far more on body language and non-verbal cues rather than the candidate actually saying ‘yes, I’m interested’ or ‘no thanks’. If they pressure you to give a definitive answer, and haven’t disclosed that it’s an urgent fill position, pay close attention for any other red flags.

The more questions you ask during an interview, the better you’ll get to know the company. If there’s something you want to know, don’t hesitate to ask. When your questions are answered, you’ll be able to confidently decide whether or not to take the job.